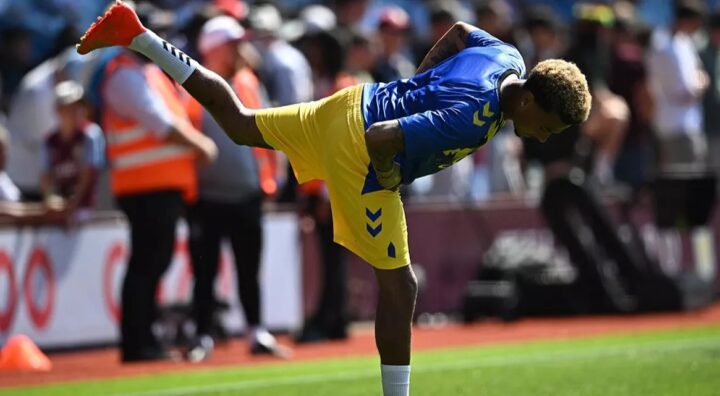 The 26-year-old football player will come to Istanbul at 01.30 today and the star will be in the squad in the Sivasspor match, which will be played on Tuesday.

The British player, who is expected to come to Istanbul in a short time, will sign the official signature after the health checks. Dele Alli, 26, played 37 times for the England National Team.

First of all, let’s talk about his general profile. Everton’s Dele Alli, who was born in 96, is 1.88 tall, goes between 8 and 10 numbers, played 37 games for the right-footed England National Team. His career was a hit when he played for Tottenham.

Discovered at MK Dons, Alli transferred to Tottenham in February 2015 for 6.5 million euros. However, due to the agreement of the half-time transfer, he continues in his team on loan for half a season. He is joining Tottenham at the beginning of the 15/16 season, and what a participation!

Of course, with this decrease, his time at Tottenham decreases. And transfers to Everton. The fee is not disclosed; Transfer to Everton in return for testimonial + bonuses at half-time of the 21/22 season. One of the bonuses is; “If he makes 20 games for Everton, 12 million euros will be paid”.

I think the importance of this item when it comes to us is great. Alli has made 13 appearances for Everton in total, scoring only 1 goal in those 13 games. Everton also wants to send the player without playing 20 games, both to earn money or to improve…

If we look at the general characteristics of the player, he is a player who has dribbling skills for offensive teams, can take effective shots from a distance, is fast for his height, can control technique and his environment, and most importantly, he can do field runs very well.

Usually when I write actor character, I say “don’t take these as compliments, these are the characteristics of the actor”. But Dele Alli these features were close to the top. You can also receive it as praise; because we are talking about a player who was priced 100 million euros in those seasons.

So Dele Alli flowed with the ball. Also, when we look at his injury history, we see that he suffered a serious injury in January 2019, was away from his jersey for 2 months, and after he returned, he was injured in Tottenham for 3 times and 1 month.

Can he adapt to Beşiktaş?

Firstly; We said the Pochettino period, there are 4 seasons in which he played at the ball level. The game system here is 4-2-3-1 weighted but variable. Those were the days when the whole team flowed like butter with the ball, the wings carried incredible balls, and Dele Alli’s number of balls was quite high.

Then the defensive approach that started with Mourinho continued with Esprito. While the number of balls Alli received per game was over 50 in the previous period, it decreased to 30 in this period. Because Tottenham has moved away from being a team that plays the game from the centre, using the centre.

Especially in teams that play at a distance from the striker, rather than clustered behind the striker, talented players who play between 8-10 are wasted. The game completely reverts to line and half-space gameplay. Cannon usage decreased when Moura came over Ki Son.

Dele Alli, whose turnovers were around 2-3 per game until the 19/20 season, which was his last well played season, and could not make a mistake by returning to the opponent’s shot throughout the season, started to lose more than 10 balls per game in the first half of the 21/22 season. The process of going has also accelerated here.

Because Tottenham is a team that makes little but self-attack in terms of its system, considering the number of attacks they entered, the number of losses was quite high. The sentences “He hasn’t played football for 2 years” are returning. Last year (Tottenham+Everton) made 29 appearances, 14 of which were starting 11.

This year, he entered 2 matches later. I think his biggest mistake was that he transferred to Everton, the player grinding factory, which was again in incredible decline, not playing from the centre. If he had transferred to a team that was more inclined to play football, his name could still be in the hills right now.

The thing that impressed me the most in the 29 games he played last year was this. Everyone’s talking about his low assists count, but he was second in the Premier League with 5.3 per game in the Interruption data. So we can clearly see that he knows the area very well.

One of the biggest criticisms about the player is his defensive performance. However, this is just memorization. In defensive actions, it is again in the 2nd place of the Premier League with 13.25 successful defensive actions per game. Here I talked about the defensive order of the teams.

Back to the beginning, why was the player sent according to this defensive data? As I said, with around 10 turnovers; You could say he lost what he had won. Because we expect Dele Alli to use the ball he won, rather than winning the ball. This is bad data in the UK.

When he plays well, I cannot say good or bad in terms of covering distance with the ball. It has an average data of 4.5. Another interesting point is that the number of passes is low in the 3rd zone, it can be accepted as the player in this zone is the receiver, not the passer, and he goes to score.

During his good times, he shot around 2 shots per game, and 1 hit rate per game. As I said, we can say that his long shots are dangerous. In most of the data, Bruno Fernandes competed with himself after his arrival. Then when it went into decline, it lagged behind.

In the 16/17 season, which we call his best period, where he made 18 goals and 7 assists in the league, he is the 3rd best player in the league among all players in the general average made with his data. In the first years, there are also the Best Young Player of the Year awards in the league. So far, we’ve talked about the field.

Now let’s come to the biggest of the reasons for coming to us; the player’s non-football life. Very bad, really bad. He is only 26 years old, but he has lived through scandals. You can find many videos and information about it. Let me state that it is very, very bad in this part, it is enough.

As soon as he comes to the club, he needs to be supported by mental counselors and evolve in a friendly environment. When Tottenham was good, Dele Alli was good. Tottenham’s bad break also hurt Dele Alli badly. Because he is a player who moves with the team.

Another issue is that we see that he is successful in the 4th rather than the 3rd system, 4-2-3-1 plays in the center of the triple close to the striker. And you’ll see that if we get it close to Weghorst, it’s going to rattle a lot. Ghezzal will be happy to add 1 more station while playing the lead.

Let me be clear, it does not directly fit V. Ismael’s system, it is obvious that he will be successful in the equation where we use the ball a lot. But if you have Dele Alli, you have to use the ball. If we set the balance well with Josef’s return, we will return Dele Alli to the game.

We need to plan this process well, we need to target teams such as Inter and Milan, and we need to draw up a sales plan with a high testimonial. It can be a very productive process for the club. Good luck, get back on the field!

Who is Dele Alli?

Dele Alli’s football career, which has become one of the most frequently mentioned football players in Beşiktaş, has become a matter of curiosity. About the football player whose transfer to the black and white team was discussed, Dele Alli’s age, where he came from, which teams did he play, how many goals did he score last season, what is his position? We have compiled the answers to your questions in our news.

WHO IS DELE ALLI, HOW OLD, WHERE IS HE FROM?

Born and raised in Milton Keynes, Nigerian-English footballer Dele Alli (full name Bamidele Jermaine Alli) was born on April 11, 1996. The 26-year-old football player was born in Buckinghamshire to a Yoruba Nigerian father and an English mother. It is known that his father, Kenny, moved to America a week after Dele’s birth. Dele spent his education at the Stantonbury Campus and Radcliffe School in Wolverton.

Dele initially lived with his mother, who had an alcohol problem. At the age of 13 he moved in with the family of another young football player from MK Dons. In the summer of 2016, Alli gave up using the name Alli on his jersey, as he did not feel any connection with his family.

Dele Alli idolized Steven Gerrard, Jason Puncheon and Yaya Touré as a child and grew up to be a Liverpool fan.

WHICH TEAMS DID DELE ALLI PLAY FOR?

Dele Alli, who started his career with the MK Dons team in 2013, transferred to Tottenham in 2015 for a transfer fee of 6.63 million euros.

The English footballer, who was loaned to MK Dons the same year, returned to Tottenham on 31 May.

He joined Everton for free at the start of 2022 after playing there for 7 years.