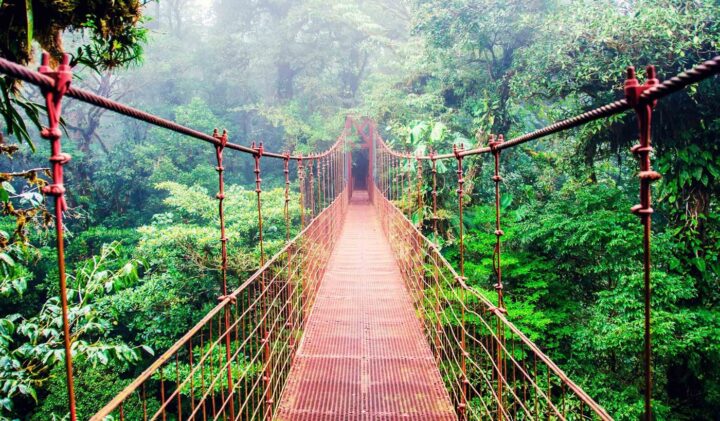 The best time to travel to Costa Rica is generally during the dry season, from December to April. However, Costa Rica is one of the lucky countries to have been blessed with not just one, but two stretches of coastline.

This is why different weather conditions prevail, for example, on the Caribbean and Pacific coasts of the country. So that you know exactly before your Costa Rica trip what to expect in terms of weather, I have collected all the information about the optimal travel time for the individual regions. Well, is that what?

The climate in Costa Rica

For those who didn’t pay attention in Geography, here’s a brief geographic breakdown. Costa Rica is located in Central America and borders Nicaragua to the north and Panama to the south. To the east is the Caribbean Sea and to the west is the Pacific Ocean.

In principle, there are only two seasons in Costa Rica: the dry season and the rainy season. But more on that later. What you have to remember for the beginning is that Costa Rica generally has a tropical climate, i.e. wonderfully warm temperatures all year round, but also high humidity.

The best travel time for the Pacific coast of Costa Rica

The best travel time for the Pacific coast of Costa Rica includes the dry season from December to April. During this period of time it is super warm and the chance of rain is lowest. Perfect conditions for a relaxing beach holiday in Costa Rica, don’t you think? In the South Pacific region you will also find the Corcovado National Park, where you can tour through the rainforest. A little tip: the rainy season is better for surfing on the Pacific coast, because that’s when the waves are at their best.

The best travel time for the Caribbean coast of Costa Rica

The best travel time for the Caribbean coast of Costa Rica starts in January and lasts until March. Basically, it is a bit colder here than on the Pacific coast, which is why the optimal travel time is two months shorter. There is no real dry season on the Caribbean coast. But in the recommended travel time it rains at least less and you have the chance to enjoy a few hours of sunshine.

On the Caribbean coast of Costa Rica, like on almost all Caribbean beaches, you will find the finest sandy beaches and turquoise blue water. Who doesn’t want to jump into the sea for a lap? Fortunately, temperatures on the east coast of the country range from 22 to 32°C all year round. If you don’t mind a little rain, you can basically go on holiday in Central America all year round.

The dry and rainy seasons in Costa Rica

As we have already clarified, the dry season counts as the best travel time for Costa Rica. This usually goes from December to April and comes with a lower humidity. It is a little rainier on average on the central Pacific coast, which is why the dry season only starts about 2 months later.

The dry season in Costa Rica is therefore the best time to travel because it rains the least during this time, it is super warm with an average of 30°C and the sun shines tirelessly. Chill out on one of the dreamy beaches, hike through the rainforest or do an exciting city tour at this time.

The rainy season in Costa Rica runs from May to November. And the rainy season actually means daily rain. However, don’t let this fact scare you off. Although it pours a lot at this time, the rain showers are mostly midday and only last a few hours. So as long as you escape to a restaurant or café at this time of day, you will mostly have bright sunshine for the rest of the day.

Basically, you can travel to Costa Rica all year round if you can deal with a few midday showers. However, if you want to be on the safe side, you should follow the best travel time for Costa Rica and arrive in the dry season. If you’ve gotten the wanderlust and are looking for cheap Costa Rica bargains, then take a look at my travel search engine and find a suitable offer.