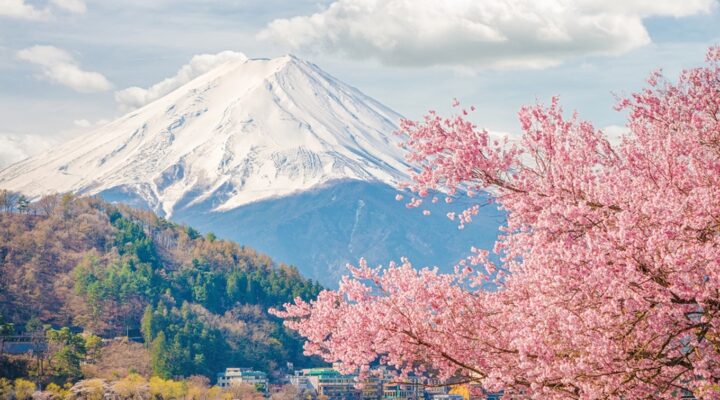 Best travel time Japan. When is a holiday in the land of the rising sun worthwhile? / Best Time To Visit Japan

The months from April to November are generally the best time to travel to Japan. However, since Japan can be divided into as many as six climate zones, this recommendation varies depending on the travel destination.

So that you are well prepared for your Japan trip, we divide the land of the rising sun into three parts: north, middle and south. Stay tuned to find out when you can see the Japanese cherry blossom, go hiking or skiing.

Centuries-old temples nestle between ultra-modern skyscrapers, futuristic express trains whizzing through rural landscapes, digital revolutions and traditional teahouses in one building. Japan is a country of contrasts and there is hardly a travel destination in Asia where tradition and modernity are so close together.

The climate in Japan

As just mentioned, the climate in Japan can be divided into zones. Quite a lot for such a comparatively small country. From warm tropical to cool and moderate to alpine climate, almost everything is there. Let’s take a look at the individual holiday regions in Japan. I suggest we work our way from the north through the center to the deepest south. Now comes the most important information for the best travel time for Japan.

The best time to travel to northern Japan

The best time to travel to Northern Japan depends on what you have in mind. In the summer months from May to mid-September you will be greeted by warm sunshine and temperatures that invite you to take a city break in northern Japan.

In the winter months, on the other hand, you can ski in northern Japan. From December to early March, cold air masses from Siberia bring cold and snow, so you can really let off steam on the slopes. If you are in northern Japan in February, you can visit the Snow Festival in Sapporo. Ice and snow sculptures transform Odori Park into a winter wonderland.

The best time to travel to central Japan

Central Japan is the first port of call for almost all travelers to Japan. There are countless popular travel destinations in the center of the country. Tokyo, Osaka, Kyoto and Nagoya are just a few examples. In this region of Japan there are vibrant metropolises, but also places rich in culture and lots of beautiful national parks. Absolute highlight: to Japan for the cherry blossom season, e.g. to the beautiful, old castle town of Himeji.

In summer it gets extremely hot while at the same time it rains a lot. Not the best combination for a hassle free holiday. In winter, temperatures drop and stay around the freezing point. The best time to travel to central Japan is therefore spring and autumn. With temperatures around 20°C and plenty of sun, a vacation in Japan can be endured just fine.

The best time to travel to southern Japan

In the south of the country there is a subtropical climate. So actually warm temperatures all year round, but with a few rain showers now and then. The best travel time for southern Japan is therefore from March to mid-November. At this time, you can spread the beach towel and have an unforgettable beach vacation in Japan. But be careful: In May it can rain more and in the summer months it can get incredibly hot, so don’t forget sun protection!

The best travel time for the Japanese cherry blossom

To give you an overview of where and when to see the cherry blossoms in Japan in 2019, I have prepared a table for you. Note, however, that the flowering time is usually only a few days, so be quick!

In the summer months, air masses blow from the Pacific in Japan. The result is monsoon-like rainfall, i.e. so-called typhoons. Of course, the coastal regions with their subtropical climate are particularly affected.

The typhoon season in Japan coincides with the rainy season. In the months from September to October it is therefore advisable to follow the weather forecast carefully.

10 of the most beautiful islands in Japan