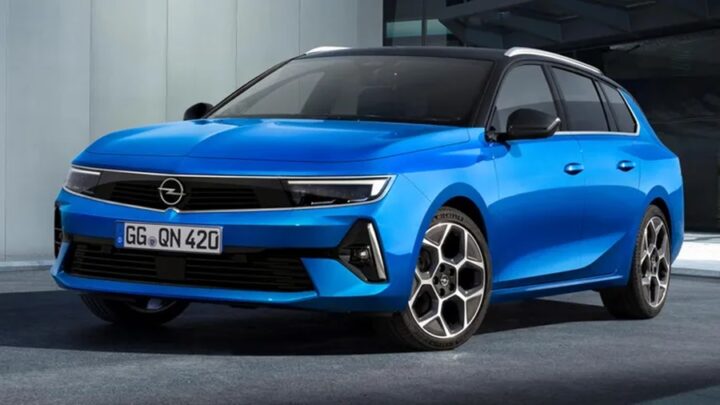 The Opel Astra has long been known to lovers of the classic compact class. The model has been on the market for 30 years. With the new station wagon, the Astra keeps up with the times – not only in terms of design, but also in terms of the drives.

With the new generation, the new Astra also received the current Opel face with the distinctive “Vizor”: Here, the black radiator grille forms a seamless unit together with the slightly tinted headlights. Incidentally, the fact that designers have a penchant for black is immediately noticeable after getting into the station wagon. Where the instrument cluster was emblazoned on earlier cars, the designers now stage their “curved display”.

At the latest when you press the start button, the black pane that extends into the region of the center console is transformed into an infotainment center. You first have to get used to the menu navigation, after a few handles you have control over the most important functions such as driver assistance and navigation and you can bring the surface of the smartphone you are carrying into the vehicle via Apple CarPlay or Android Auto.

He’ll bring that with him / New Opel Astra Sportstourer

Lots of space. The sports tourer is a station wagon with a sizeable 1,634 liters of luggage space, the hybrid “only” holds up to 1,553 liters. There are also plenty of high-tech features, including adaptive LED headlights, which, however, depend on the equipment line and cannot be ordered as an extra. Also included are a head-up display, all-round camera, a wide selection of seat variants, as well as traffic sign recognition and voice control that accepts free speech.

That’s how he drives

The Astra Sportstourer offers a wide range of drives. For the first contact with the compact station wagon, Opel brought almost all of the engines with it, except for the electric variant that will follow next year.

So it starts with the 130 hp petrol engine (a variant with 110 hp is also available), which is available both with automatic and as a switch. In line with the downsizing idea, it works as a supercharged three-cylinder version with a narrow displacement of 1.2 liters. It’s not that the small engine is loud, but it reveals itself through its whirring, which is characteristic of the number of cylinders. Whether with an eight-speed converter or a switchable six-speed box – the engine (230 Newton meters from a low 1,750 rpm) pulls the 1.4-tonner sufficiently powerful.

The same applies to the 130 hp diesel, for which the price list also includes automatic and manual transmissions. It is debatable whether diesel, which is equipped with complex exhaust gas cleaning systems today, still makes sense at all in view of the increasing use of electromobility – also in terms of operating costs. But long-distance users in particular will be happy. Because even in 2022, covering a thousand kilometers in one go will only work with a diesel engine.

In contrast, the plug-in hybrid turns out to be a moody drive in the course of this series of tests. The double motor with 130 hp (also available: 225 hp) marches ahead briskly, reaches country road speed after 7.7 seconds and does not lose any significant momentum beyond that. Thanks to a battery capacity of around twelve kWh, the plug-in is well averaged for 60 kilometers of purely electric driving and can even cover 72 kilometers through city traffic without using the petrol engine.

The combined WLTP consumption of the petrol variants levels off at just under six liters, while the diesel consumes an average of just around four and a half liters per 100 kilometers.

The Opel Astra Sportstourer is available from 27,750 euros as a petrol engine, as a diesel from 32,150 euros and as a plug-in hybrid at 39,750 euros. The first copies will be delivered in autumn.

Since the early 1990s, the Astra has been in a duel with the blockbuster VW Golf. The current generation is also available as a variant at prices from 30,880 euros with 110 hp. The Ford Focus Tournament, which has been freshly modernized like the Kia Ceed SW, costs from 23,650 euros. The Kia costs from 21,190 euros with a 100 hp petrol engine. Other compact station wagons (selection): Seat Leon Sports Tourer, Hyundai i30 station wagon, Honda Civic Tourer, Toyota Corolla TS, Peugeot 308 SW, Renault Megane Grand Tour.