Although Marmaris is a district, its reputation has surpassed that of Muğla province. / Marmaris Travel Guide

It is a very popular holiday destination. Marmaris draws attention with its natural riches and beaches. It is very popular with tourists. Nature, sports, entertainment, tranquility, sea, sun, sand, history, culture, lively nightlife and delicious local cuisine… Marmaris will meet all your expectations. In this article you will find everything you want to know about your Marmaris trip.

The minimum sea temperature in Marmaris is observed in January and February and falls below 15 degrees Celsius. The water temperatures, which rise in the spring and summer months, reach up to 25 degrees in the summer months.

Where is Marmaris located?

Marmaris is located in Mugla province. It lies on the border between the Mediterranean Sea and the Aegean Sea. It is very centrally located and faces the Greek islands. It borders with Hisarönü, Orhaniye and Turgut districts.

More about Where is Marmaris

With its temperate and mild climate, Marmaris can be visited in all four seasons. Marmaris has the peculiarities of the Aegean climate; the summer months are hot and and the winters are mild and rainy. If you want to enjoy the sea, sand and sun, the best time for your Marmaris trip is in the summer months. However, if you want to enjoy nature walks, explore the city, and have a quieter vacation, a better choice is to travel in the spring months.

When to go to Marmaris Turkey?

How to get to Marmaris / Marmaris Travel Guide

You can fly direct to Istanbul from cities like Berlin, Frankfurt, Dusseldorf and then reach Dalaman Airport via a one-hour connecting flight from Istanbul.

Search now for the cheapest flight tickets to Dalaman and take advantage of the early bird offers.

Transportation from Airport to Marmaris Center

When you arrive at Dalaman Airport, you can go to the center of Marmaris using many different transport options. It is difficult to get from the airport by Marmaris City public transport. You can use the official transfer service called Muttaş. Another option would be to take a taxi. For a more comfortable journey, it is advisable to rent a car. They can travel flexibly and reach all their places without time pressure. To rent a car, you can use the services provided by Pegasus Airlines and visit the Pegasus car rental website. 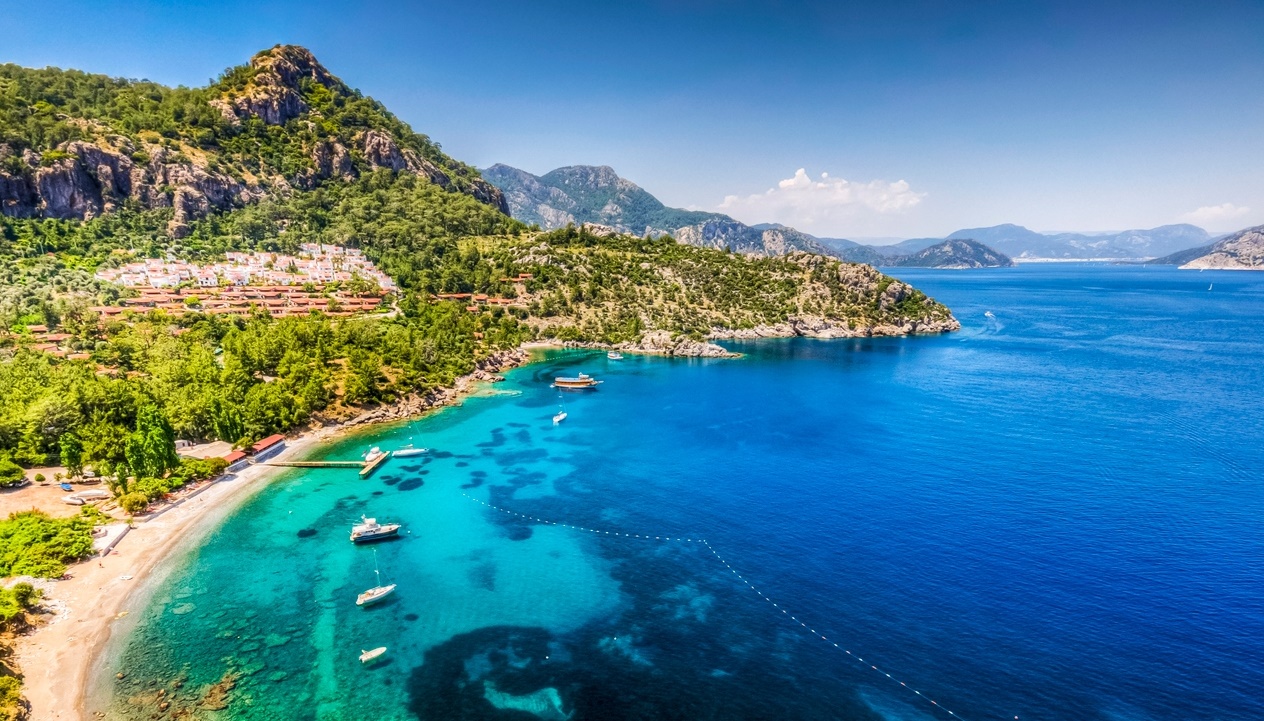 The history of the castle, which is the most important historical structure in the center of Marmaris, dates back to 1044 BC. and the Ionian period. The currently visited part of the building, which was renovated and expanded during the reigns of Alexander the Great and Suleiman the Magnificent, dates from the Ottoman period.

The museum contains numerous archaeological remains from Hellenistic, Roman and Byzantine times, which were uncovered during excavations in the regions of Knidos, Hisarönü and Burgaz.

The caravanserai also remained from the Ottoman period. It was built in 1545 for Valide Hafsa Sultan. She was the mother of Suleiman the Magnificent.

Marmaris National Park is very close to the center of Marmaris. In this beautiful park, where blue and green meet, you can take a nature walk.

You will reach Paradise Island (Cennet Adasi) on the way to Marmaris National Park. Protecting Marmaris from rough waves, the island offers an unmissable and unforgettable experience with its magnificent nature and unique sea.

In Marmaris Grand Bazaar you will find many shops selling souvenirs and clothes.

Among the must-see places in Marmaris is Paradise Island, which is about 9 km from the center of Marmaris. Located on the island of Cennet, the stony sea bay is one of the places to see with its deep blue sea.

İçmeler Beach is one of the ideal holiday regions with its clean sea and sandy beach. There are also many activities that can be done on the beach. If you go to Icmeler Beach, you can try many activities such as canoeing, parasailing and boat tours.

The sea on Turunc Beach is so clean that you can see underwater even without glasses. You can also visit underwater caves and have a unique experience in Turunç, a Blue Flag beach.

The beach takes its name from the legend that Cleopatra visited the beach and went there. Located near Kerme Bay, it is one of the must-see places in Marmaris. The island of Sedir, on which the coast is located, is overgrown with cedars and got its name from here.

At İncekum Beach, not only is the sea clean and clear, but the sand on the beach is also fine. . The beach where forest and sea meet is loved and preferred for its natural beauty. 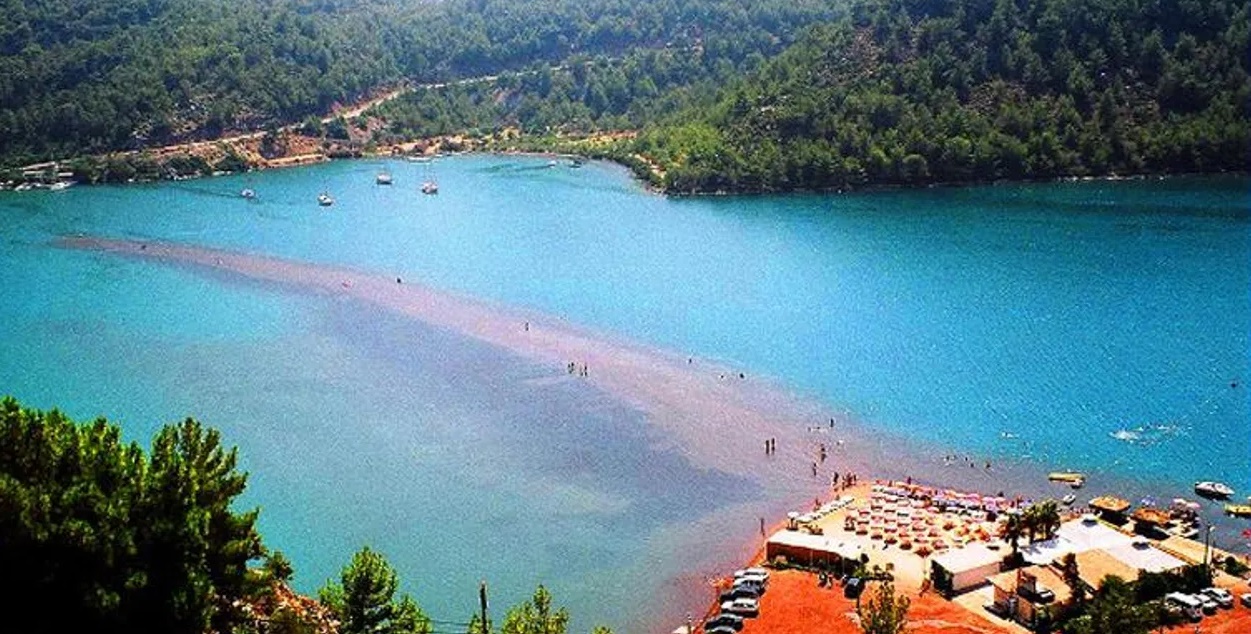 At Kızkumu Beach, the sea is shallow compared to other regions and the water is quite clean, so you can feel like you are on the water when entering the sea! Although there are many legends about Kızkumu, it is said that it was named after the daughter of the king of Bybassos who died of his love and there is a statue depicting her in the region.

Located to the north of Marmaris, Bördubet Bay draws attention with its land covered with pine trees. Bördübet derives from the name “Birds Bed”, which British soldiers who fled here during the First World War came up with, as they perceived this bay to be particularly rich in birds.,

Kumlubuk is slightly before Turunç mentioned above. It has a beach covered with small pebbles. There are also some popular restaurants on the beach.

The beach is 10 km long. It is quite large and is one of the most convenient places to swim in Marmaris. There are also many cafes and restaurants on the beach.

Selimiye, where the blue fascinates visitors, is located in one of the most beautiful bays of the Hisaronu Gulf.

The village is located in the south of Marmaris. It is one of the most preferred regions especially for jeep safaris. The old pine tree in the center is a meeting place for all visitors.

Sarigerme has a very long beach. The ruins of the ancient city of Pisilis, one of the most important ancient cities in the region, lie just behind the beach. Sarigerme is a place where nature and history meet. 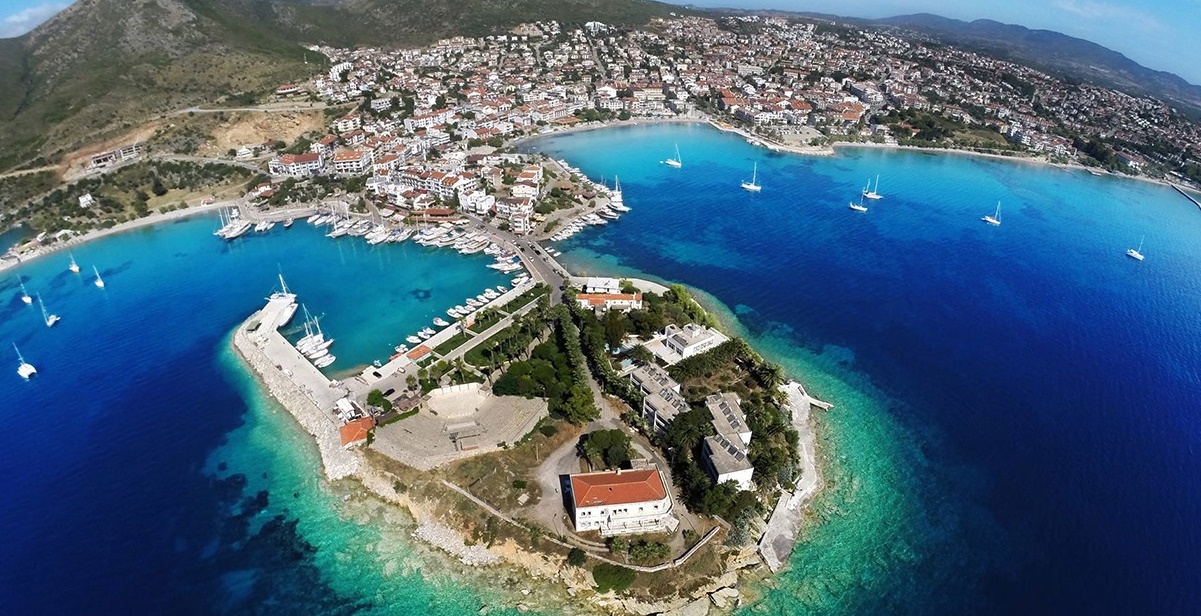 Hisarönü is quieter than other parts of Marmaris. It is a place preferred by those who want to spend time alone with nature. With its small and charming bazaars, numerous bays and beaches (Hisarönü Bay, Turunç Beach, Boncuk Bay) and historical places (Phykos Ancient City, Marmaris Castle, Marmaris Museum), Hisarönü offers a very nice vacation opportunity.

Selimiye is a region linked to the sea with a very large marina where people live mainly from fishing. Selimiye, which is quite quiet, is actually a fishing village connected to Hisarönü. Because of this, Selimiye can be your choice for a peaceful vacation.

Söğüt village is famous for the hospitality of the villagers. The village is where many natural products sold in the district are grown. Visiting the village you can buy handmade jams and taste the freshest vegetables.

Orhaniye is surrounded by pine forests. In Orhaniye the sea is always calm. Therefore, you can easily swim anywhere. The region is famous for Kızkumu Beach. In the middle of the bay are the remains of an old castle.

Köyceğiz has hosted many ancient civilizations such as Carians, Scythians and Assyrians. It is known as one of the regions where the historian Herodotus gave speeches. Koycegiz, which is characterized by its natural beauties, is waiting to be discovered.

Datça is home to many ancient ruins and its history is more than two thousand years old. The oldest inhabitants of the region are the Carians, as well as in Marmaris and the surrounding area. It is surrounded by forests. Nature and history meet here.

Activities and Nightlife in Marmaris

One of the most popular activities in Marmaris is water sports, especially scuba diving, jet skiing and parasailing. In addition, nature walks are often preferred by visitors. If you travel to Marmaris, it is definitely recommended to join the boat tours. However, there are also activities with higher adrenaline levels. For example, during your Marmaris vacation, you can experience activities like paragliding and jeep safaris.

Apart from that, the nightlife in the region is extremely active and vibrant. In the region you will find many discos, clubs and entertainment venues.

Marmaris has the most delicious examples of Aegean and Mediterranean cuisine. Marmaris also has restaurants that showcase examples of Chinese, Italian, British and Indian cuisine.

Fish and seafood are the most commonly consumed dishes in Marmaris. In addition, olive oil dishes are very present in the kitchen.

Since olive cultivation is widespread in the region, almost all regional dishes are prepared with olive oil.

Some of the flavors unique to Marmaris cuisine that you should definitely taste:

As Marmaris is an extremely popular holiday destination and hosts many local and foreign visitors each year, you will not have any trouble finding accommodation in Marmaris. There are many options, such as five star hotels or more affordable boutique hotels. Most of the hotels in Marmaris are usually located along the coast. If you want to relax in the company of the sea and sun, hotels on the beach are a great option for you.

If you are planning your summer vacation in Marmaris, early booking is recommended. As this is a very popular holiday destination, pre-season booking is a good idea. You can visit the Pegasus Reservations page for early access to the cheapest accommodation.

Especially in the Grand Bazaar in the center you can buy gifts and sovernirs. Apart from that, there are many street markets in Marmaris.