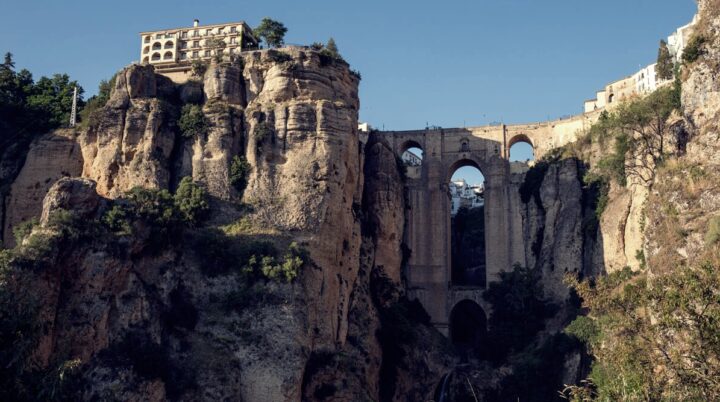 For many travelers, Andalusian Ronda is just a stopover on their road trip. Here you can read why a longer holiday in the place that is one of the “white villages” pays off. And that’s not just because of the famous El Tajo Gorge.

Many villages in Spain appear a bit inconspicuous at first glance and also very similar to each other. A clear exception is Ronda in the province of Málaga in Andalusia. Even the first view of the place is – there is no other word to describe it better – spectacular. After all, the town with its whitewashed houses rises above an impressive gorge that is over 100 meters deep. The cliff walls of the valley carved by a river are spanned by several bridges, of which the Puente Nuevo is by far the most famous. As a symbol of Ronda, this building alone attracts holidaymakers from all over Spain and all over the world.

Cave paintings prove that it is one of the oldest Spanish cities. The first place mentioned by name, however, comes from the Roman period. Moorish influences from the 8th to 15th centuries are still present today. The inhabitants of that time probably already appreciated the special environment in the Serranía de Ronda mountain landscape! Ronda is on the Ruta de los Pueblos Blancos, so it has whitewashed houses and winding streets in common with other towns on the route.

Continuing education while on holiday is important to you – for example in museums or on a sightseeing tour? In Ronda nothing is easier than that! There are numerous sights here that attract attention with their historical diversity and of course also provide interesting information about the past of the place for holidaymakers. Due to the picturesque location of Ronda, the city also scores with those seeking peace and quiet and nature lovers and the proximity to the Costa del Sol makes a beach holiday possible.

In Ronda, sightseeing is an absolute must for every visitor, because there is practically one hotspot after the next. Of course, the focus is on the impressive bridges in the town, but there is also a lot to discover for friends of old buildings and archaeological sites.

There is no vacationer in the region around the Puente Nuevo around. Because: the bridge is the top attraction in Ronda and the surrounding area. As a landmark, the stone building spans the deep El Tajo gorge, which divides the city in two. It dates from the 18th century, has four archways and leads over the gorge at a height of around 120 metres. In the same place, in front of the Puente Nuevo, there was a much smaller bridge, which collapsed after six years of presence and even claimed lives. Fortunately, the stone bridge has lasted much longer. It connects the old and new town of Ronda and is best photographed from the Mirador de Aldehuela and Mirador de Ronda viewpoints.

The Puente Viejo is just 400 meters from the Puente Nuevo. It is smaller and lower than its big and younger sisters, stands about 30 meters high and was built in the 16th century. It is a pedestrian bridge that used to be the only connection to one of Ronda’s districts. It also serves as a great photo opportunity on a sightseeing tour of Ronda, even if it can’t quite keep up with the Puente Nuevo. Funnily enough, it once bore that name itself, as there is an even older bridge called Puente Árabe.

Parts of the Puente Árabe are said to have existed as early as the 11th century. Some elements of the masonry and the foundation are attributed to the Moorish period of Ronda. Overall, at 12 meters high, the bridge is not as majestic as Puente Nuevo and Puente Viejo, but it still has a nostalgic charm that speaks for itself. It retained this despite some restoration work. By the way, if you are coming from the north, you can only reach certain old town districts via the Puente Árabe.

Of course you will find more highlights in Ronda apart from the bridges. How about, for example, a church from the 16th to 18th centuries? In fact, the Iglesia de Santa María la Mayor was built in Ronda’s old town during this long period of time. As the city’s main church, the multi-styled place of worship is a typical must-see, even for non-religious visitors. Due to the long construction period of the building, you can discover late Gothic and Baroque features as well as signs of the Renaissance. Another special feature of the church: it was built on the remains of a mosque. 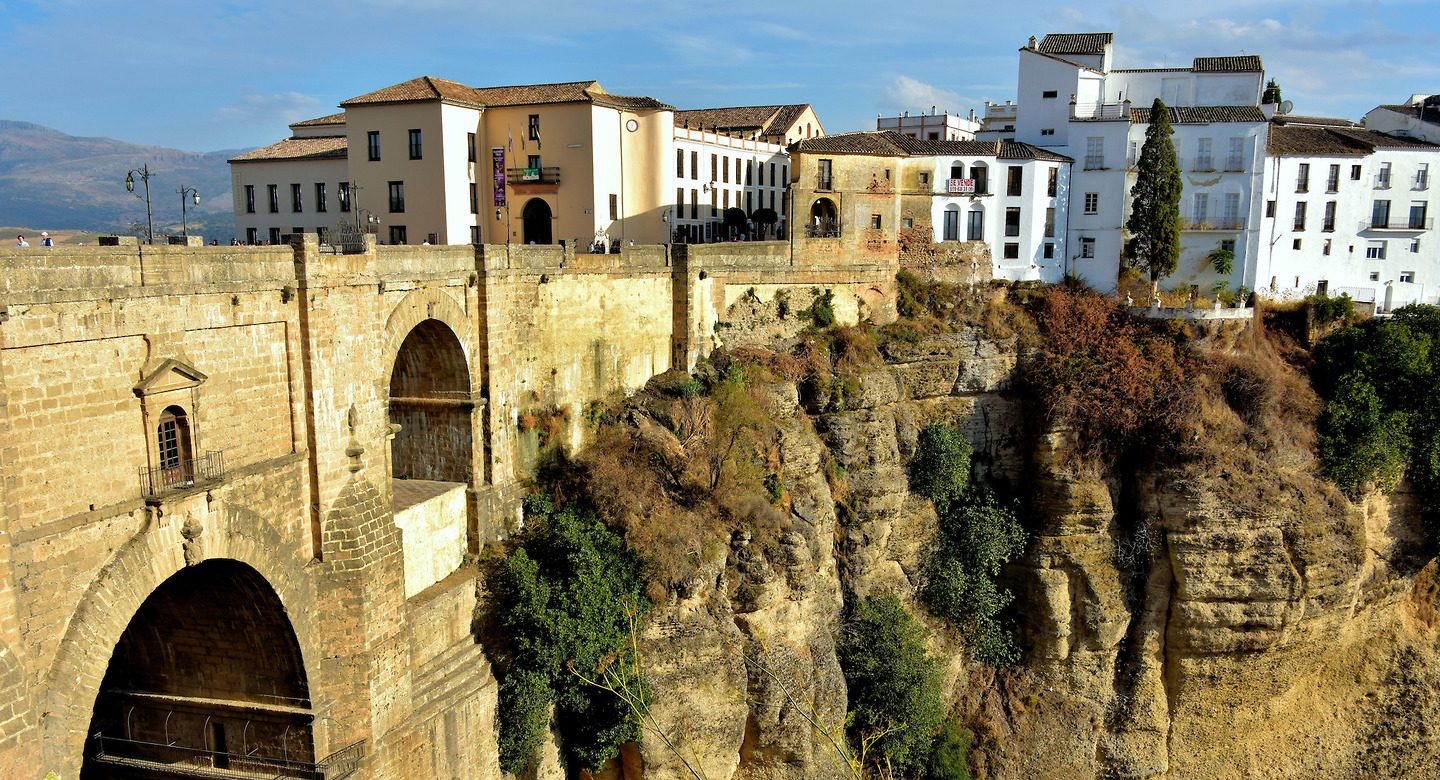 The Arab Baths are a remnant of Andalusia’s Moorish times. They probably come from the 13th or 14th century. The faithful used the baths for ablutions before prayer. The hydraulic system, which could feed water at different temperatures, is particularly impressive. It is logical that the residents of that time probably also used the wonderful place as a leisure meeting place. Incidentally, the well-preserved complex was only rediscovered and uncovered in the early 20th century. Previously, after the baths were abandoned, it was still used as a tannery.

The Palacio de Mondragon is known as one of the most important buildings in Ronda. It is said to have belonged to a Moorish king, but this is not historically proven. The pretty house would certainly do well as a royal residence and the gardens with their Moorish courtyards are also suitable for longer stays. Perhaps one or the other is also interested in the city museum located inside, which enables a journey through time through Ronda and all of Andalusia.

Another tip is the palace Casa del Rey Moro with more gardens and an impressive fountain. This extends to a depth of 60 meters. The house itself is said to have been built in the 18th century and the gardens laid out in the 20th century. These are so-called hanging gardens with palm trees and other plants that allow relaxation at first glance. You can even descend into the El Tajo gorge from here.

If you have more time and want to explore, you should add the Ruins of Acinipo to your to-do list. You can reach it after a good half hour drive by car. The former Roman town is a comparatively unknown insider tip in the region. But this one has it all: Located on a hill of about 1,000 meters, it seems like a little world of its own right from the start. This consists of Roman ruins, of which one building in particular catches the eye. It is the superbly preserved amphitheater with a semi-circular tribune. Due to the good condition, it is not surprising that performances still take place there today. Outside the theater, the expansive view over Andalusia is particularly impressive, which is more beautiful here than in almost any other place.

Tip: You should definitely find out about the opening times before you go on holiday, as the site is not always accessible.

Sightseeing tours alone may sooner or later become a bit monotonous. Therefore, here are a few tips on what else you can do in and around Ronda!

Adventure seekers will surely love the Cueva de la Pileta cave, which can be visited half an hour’s drive from Ronda. Its cave paintings suggest that people lived in it tens of thousands of years ago. Today, access to the cave, which was only found in the 20th century, is only possible via a guided tour. For these you should wear sturdy shoes and register in advance as the number of visitors is limited.

In the footsteps of literature

Anyone who has experienced the beauty of Andalusia is hardly surprised that a large number of artists were inspired by the unique atmosphere in the 19th and 20th centuries. Ernest Hemingway, Rainer Maria Rilke and Gustave Doré are probably the best known of those who spent some time in Ronda. It’s best to grab Ernest Hemingway’s “For Whom the Bell Tolls” and immerse yourself in the events of a small town at the time of the Spanish Civil War. Anyone who strolls through the alleys of the historic old town will definitely agree with Rilke’s opinion that Ronda is a dream city!

In the city, your thirst for knowledge will be sufficiently satisfied thanks to several museums. The city museum with excavations of the area is probably one of the classics that attracts a wide audience. The Joaquín Peinado Museum, on the other hand, is dedicated exclusively to the painter of the same name and is therefore aimed at a narrow group of interested parties. A third museum is the Lara Museum, which presents around 2,000 exhibits from the world of art and antiques.

You need about an hour by car to the Costa del Sol – and a beach holiday like from a picture book awaits you there. Sandy and pebbly beaches do the honors and leave the choice of sunbathing or taking a dip. Things can get a little more active if you decide to take a trip on a motor or sailing boat. Take a look under the water surface while diving or snorkeling or go stand-up paddling. With children you should spend a leisurely day at the beach splashing about and looking for shells.

Maybe you just got a taste for sightseeing and want to see a lot more. This is possible, for example, in Málaga. Many holidaymakers choose to visit Ronda as a day trip from Malaga. But of course it also works the other way around. You will get to know the Alcazaba fortress, a Roman theater and other old places of worship. Either by car (in about 1.5 hours) or by bus, which runs 4 times a day (in about three hours), Málaga is only a holiday decision away.

Anyone who has fallen in love with Ronda, the bridges and the surrounding area should not hesitate and go on holiday in Andalusia. Finally, to ensure that everything runs smoothly, our practical travel information follows.

The travel time is roughly between April and October. Those who are sensitive to heat should avoid July and August. The thermometer then shows 30° Celsius and more. Beach holidaymakers can then put a trip to the Costa del Sol on their to-do list! The moderate temperatures in April and May and September and October are more suitable for sightseeing. Even active people are happy about an average of 20° Celsius.

Tip: If you come to Andalusia several times, you should do so once a season and photograph the bridges over the gorge. It’s really impressive how the environment changes throughout the year!

Ronda is a manageable place that is ideal as a day trip destination from the Costa del Sol, Malaga or even Marbella. In just a few hours you have seen the most important highlights. However, we like the city so much that we recommend staying at least two or three days!

You quickly ticked off the preparations for the trip, because you only need a valid identity card and a few euros in your pocket. Therefore Spain is generally ideal for spontaneous travellers.

Magnificent houses and villas are often the location for vacationers and promise maximum relaxation. This is where old Spanish architecture meets modernity. Thoroughly modern complexes are also represented. Enjoy amenities such as a private pool or your own hotel garden, where relaxation is certainly not neglected. Some hotels are centrally located in the city and help with short distances to the sights. You can get pure peace and quiet in the accommodations in the surrounding area, embedded in idyllic nature and, due to the location outside of the city, usually even cheaper.