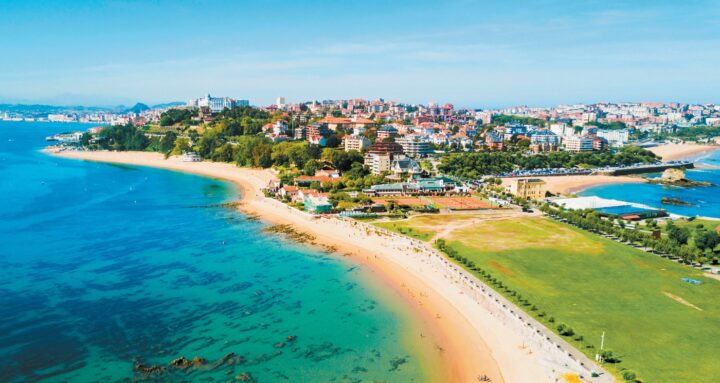 Santander is one of the insider tips in the north of the Iberian Peninsula. The focus here is clearly on beach vibes and the idyllic nature of Cantabria, which is not called “green Spain” for nothing. With the annual festival in August, Santander also has a special cultural highlight to offer.

Santander is located in Spain on the Bay of Biscay, west of Bilbao in the beautiful province of Cantabria, whose capital it marks. It is known to vacationers primarily as the venue for an international dance festival, but also as a bathing resort. If you haven’t heard of Santander yet, that’s not unusual either – we would classify the cultural city more as an insider tip. Why is it still worth a visit? Simply because of the many bathing possibilities! Several beaches are on the outskirts of the city. Surfers, swimmers and sunbathers can soak up the warmth of the sun at the respective spots.

The cultural center of Cantabria only has a few sights, but with a hop-on hop-off tour you can get to know them all the more relaxed. Nature and hiking play an important role in the trip to Santander, simply because the famous Way of St. James stops here with its destination Santiago de Compostela. In the outskirts of Cantabria, a lot of greenery as well as a mountainous and coastal landscape await explorers. Choose for yourself how intensively the focus should be on fitness on holiday. If in doubt, endless days at the beach are also an option.

Large parts of Santander’s old town were destroyed by a major fire in the 20th century. Therefore, the historical must-sees are comparatively few and far between. But it doesn’t matter, because that way you can devote enough time to the remaining highlights!

Santander Cathedral is one of the buildings that fell victim to the devastating fire. Unlike other buildings, however, it was rebuilt – and relatively soon after the fire. The current character dates back to 1942-1953, while the original church was built between the 12th and 14th centuries. It also bears the name “Cathedral of the Assumption of Mary” and is a Catholic church. Actually, it belonged to an abbey that came from the 12th century. Since 1931 the cathedral has been included among the national monuments of the country. Today’s appearance is also impressive and worth at least one photo!

Magnificent, noble, immediately eye-catching – these are keywords that spontaneously come to mind when we think of the elegant Palacio de la Magdalena. Dating back to the early 20th century, the structure was originally built as a summer residence for King Alfonso VIII. Previously there was a fortress at the site on the Magdalena peninsula, which was supposed to protect the Bay of Santander from attacks. In the meantime, the palace is not only a photo opportunity and attraction for visitors, but also a building that is used by the summer university. 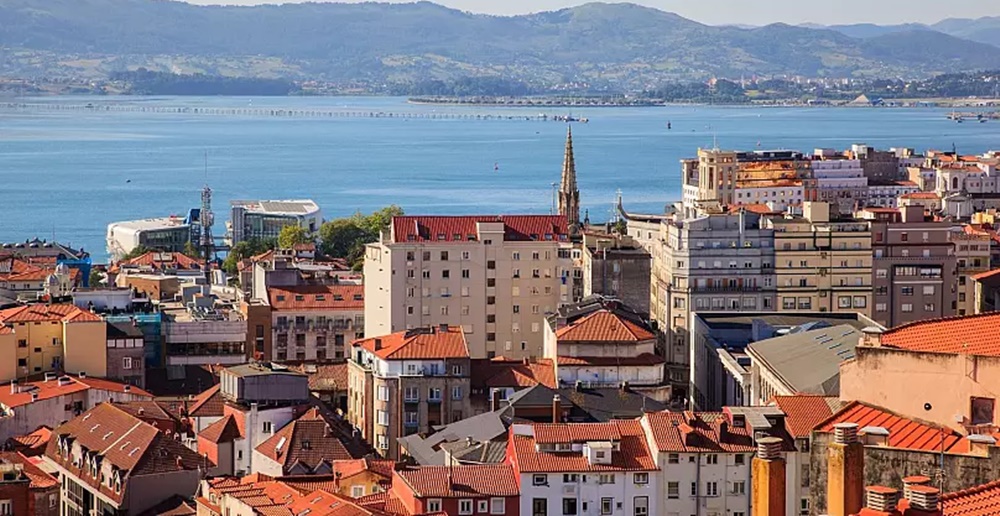 Since 1982, the Palacio de la Magdalena has been officially a historical monument. It is surrounded by a picturesque park on the 25-hectare Magdalena Peninsula. This houses, among other things, a small zoo, a playground and of course the Palacio itself. Families with children, those seeking peace and quiet and those interested in culture have found a suitable destination here. The paths invite you to spend leisurely hours in the fresh air and are always rewarded with vantage points towards the coast.

Opened in 2017, the Santander Cultural Center is one of the newer buildings in the city. Together with the Jardines de Pereda gardens, it marks a kind of transition between the sea off the coast and the urban center. With the official inauguration in 1905, the gardens look back on a much longer history than the Centro Botín. They are dominated by a colorful flora of magnolia, palm, pine and fruit trees. The Centro Botín also quickly catches the eye when strolling through the gardens. Partly it even seems to float above the water due to the construction with supporting pillars. Inside you will find, among other things, various exhibition rooms and an auditorium with sea and mountain views.c

The Best Beaches in Santander

Water sports, swimming, looking for shells… if that’s your thing, you should read on now! Santander in combination with the beach makes a holiday by the sea perfect.

When asked about the most beautiful and popular beach on the Cantabrian coast, there is a good chance that Playa El Sardinero will be mentioned. This is not surprising given the good water quality and the beach, which is suitable for collecting shells. Due to the location in the city area in front of an upscale residential area, it quickly fills up. At particularly busy times, however, you can also switch to the beach promenade.

Playa de El Puntal lies on a sandbank that slowly widens into a bay. That leaves the choice between the two sides of the sandy headland. The side facing the open sea has an intense current and is only for the brave, while the “rural side” with shallow water also scores with families with children. All bathers will surely love the view of the entire city of Santander and the surrounding mountainous landscape here.

Attention surfers: This will probably be your favorite! Because the 800 meter long and up to 60 meter wide beach has breathtaking cliffs, strong currents and excellent wind conditions for exciting water sports. Other active people who should visit Playa de Langre are snorkelers and divers, because the underwater world is at its best here. The beach is less suitable for classic holidaymakers, because the water is not suitable for cautious swimmers due to the intensity of the current. There are also not the usual places to stop for refreshments on site.

Perhaps you have already seen the lighthouse while walking around Santander. This is framed by Playa de Mataleñas. Due to the location surrounded by cliffs and the steep access, many bathers decide against this beach, which makes it the ideal sunbathing spot for those seeking peace and quiet. Do you want to dare? Great! In our opinion, the golden sand and the turquoise-blue water make up for the more complex route in no time at all.

Besides the city and the beaches, you can explore the area and get even more active. In addition, there is a tip for everyone who prefers to take a leisurely look at Santander’s highlights. We also took a close look at excursion destinations.

The international festival of dance and music in Santander is a highlight of August and takes place every year. It has been an established tradition in Cantabria since the 1940s. In addition to concerts, ballet and theater performances and operas, there are special art events from all possible genres. Unusual places such as caves or palaces serve as a backdrop, in which the artists perform or, for example in the field of painting, present their works. Both classical art and innovative ideas are represented and quickly sweep the audience away. Even culture haters will have fun at the festival.

With its thriving flora, it’s immediately clear why Cantabria is nicknamed “green Spain”. You can get to know the landscape better on hikes and walks. Or you can stay in the region along the coast, where the blue sea creates a pleasant contrast. Of course, greater challenges can also be overcome in the Cantabrian hills. After all, more than 200 mountains await you here, each breaking the 2,000 mark. Finally, we recommend the section of the Camino de Santiago that passes through Santander and attracts pilgrims from all over the world.

The fact that Santander has hardly any historical buildings doesn’t bother you on a cultural holiday. After all, there are still museums with informative history! The Cantabrian Maritime Museum is one of the ways to learn more about seafaring and the sea. It has 3,000 square meters of space and is divided into four thematic areas.

The Museum of Prehistory and Archeology of Cantabria, on the other hand, is dedicated to the region’s early past, such as the Iron Age or the Roman Age. Around 1,200 exhibits aim to provide broad knowledge about these periods in several hours. Those who are more art lovers cannot miss the Museum of Modern and Contemporary Art of Santander and Cantabria. Established in the early 20th century, the art collection is one of the most important of its kind in the area.

A hop-on hop-off ride is not only exciting in big cities like London. Insider tips like Santander also pamper vacationers who like to take it easy and tend not to go sightseeing on foot. The buses usually run between 10:30 in the morning and 18:00 in the evening. Enough time to visit the usual must-sees! The advantage of the tour is not only that it stops at the top stations in the city, but also that you can get on and off at the stops with just one ticket. Hence the name “Hop-On Hop-Off”. The port, the old town and the lively squares of Santander are of course not left out during the tour.

750 hectares and over 100 animal species – these are the characteristics of the Cabárceno Natural Park. The wildlife park is dedicated to the protection of endangered species and at the same time aims to increase people’s awareness of the environment. It is a karst landscape located about 17 kilometers from Santander. The trip is worth it, because the tour leads past picturesque lakes and breathtaking gorges. By the way, tired feet are no excuse, because the Cabárceno Park can also be visited by car.

The proximity to Bilbao is a plus for vacationers in the region, because with enough time both cities can be visited in peace. About an hour’s drive must be planned in the direction of Bilbao. You have already arrived in the impressive cultural city. Compared to Madrid and Co., the clocks go much slower here. The focus is on relaxation. A tour of the green Parque de Doña Casilda de Iturrizar or a stroll through the old town of Casco Viejo with its typical Spanish streets and houses will quickly slow you down. If there is enough energy for the hustle and bustle, it will be exciting again at the latest when it comes to nightlife. The Spaniards know how to party – and you can be part of it!

Have you decided to spend your holidays in Santander? Then it’s time to plan your trip to Spain. We also offer helpful travel information so that everything works.

It is logical that most travelers come to Santander in the summer, because the water temperatures alone then climb up to 22 degrees Celsius. August is not only high season for bathing holidays, but also festival time – those hungry for culture can experience a varied program in Santander. If you want to hike and visit nature parks or museums, you should set a course for Santander in spring, late summer or early autumn.

A day for Santander, a day for Bilbao and a day for the rest of Cantabria – this is how the shortest version for planning a trip could look like. At least two days per city should be in it if all sights are on the list.

Fish and seafood are the order of the day in a seaside town like Santander. Our special tip: the restaurants in the fishing district of Barrio Pesquero. Traditional and innovative dishes are served there.

Being gently woken up in the morning by the sound of the waves and seeing the sunrise right away – this works best in hotels right by the sea. Luckily, such accommodation can be found in Santander. Some also boast their own pool and balconies in the rooms or direct access to the beach. Alternatively, the hotels away from the beaches should not be scoffed at, which are a little more economical on the budget. Whether your focus is on a modern city hotel or a cozy guesthouse with a family character – if you book in good time, you have enough choice.