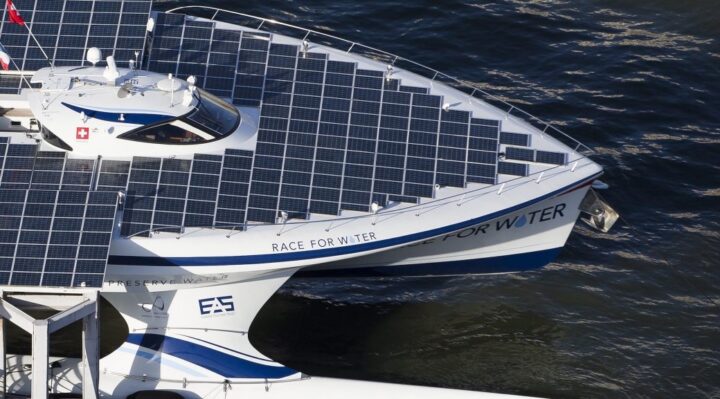 The “MS Porrima” is the largest solar ship in the world

Solar power instead of heavy oil: Using resources effectively is the core philosophy of the world’s largest solar ship.

The “MS Porrima” is a concept boat that focuses on environmental research and shows that sustainable technologies could revolutionize shipping.

According to the Federal Ministry for Economic Affairs and Climate, more than 90 percent of world trade is carried out by sea. This disrupts marine ecosystems, contributes to ocean acidification and causes more CO2 emissions than air traffic every year. The “MS Porrima”, the largest solar ship in the world, is operated exclusively with renewable energies: solar, wind and hydrogen power. It is currently on a circumnavigation of the world and cruising the seas with hopes of a sustainable future.

The “MS Porrima” bears the name of the Roman goddess of the future, who is also considered the protector of pregnant women. dr Gunter Pauli, entrepreneur, designer and founder of “The Blue Economy” wants to use his ship to contribute to a profound understanding of technological innovation in the name of sustainability. The so-called “Steve Jobs of sustainability” proclaims a healthy lifestyle. Innovation and technology should be at the service of everyone – including nature.

On the “MS Porrima” website, Pauli sends a message to the readers: “We urgently need a positive vision of the future that surprises and shows new ways of enjoying life. At the same time, however, we must correct the mistakes of the past. ‘Porrima’ is a vision of the future that is now becoming a reality. It’s about making hydrogen with seawater, generating electricity from wind power, cleaning seawater, and isolating and destroying microplastics.”

The largest solar ship in the world is 31 meters long and 15 meters wide. Its electric motors are powered by solar panels on deck. The 530 square meter deck consists of a total of 825 solar modules with 38,000 photovoltaic cells. Batteries, which are also charged by the power of the sun, provide the energy at night. The excess solar power produced on the solar catamaran is used to obtain hydrogen from seawater with the help of electrolysis. To do this, the ship is equipped with a filter that isolates nanoplastics from the seawater, concentrates them and converts them into hydrogen. This green energy then drives the fuel cells in the electric motors.

But the ship also scores in terms of sustainability. A miniature farm allows Pauli to grow edible spirulina algae and mushrooms. Bubble nets prevent overfishing by separating fish by weight. This releases the reproductive females, who are usually heavier because of their eggs.

The “MS Porrima” is currently on a round-the-world trip and left Osaka, Japan, on December 18, 2021. The MS Porrima will return to Osaka, Kansai for the opening of Expo 2025. Until then, the crew wants to draw attention to sustainable innovations in shipping in numerous cities on five continents (Asia, Europe, Africa, North and South America). This is part of the “Team Expo 2025 Special Supporter Program”. A program aimed at achieving the United Nations Sustainable Development Goals (SDGs).

During the first few days of circumnavigating the world, Gunter Pauli was overwhelmed by the silence on board his solar-powered ship. “When the engine isn’t running, it’s quiet. There’s a real sense of awe and inflexibility, and there’s a lot of time to think,” the Belgian entrepreneur told CNN. “There’s a definite sense of, ‘Oh my God, I’m vulnerable – I’d better be careful with what I have,'” the economist continued.

Gunter Pauli hopes to bring about change in the near future. Part of the technology of the “MS Porrima” is to be disseminated in the shipping industry. By 2024, the nanoplastic filters should already be installed on 1000 ships in the Mediterranean to start a major cleaning campaign.

First circumnavigation already between 2010 and 2012

Between 2010 and 2012, the “MS Porrima”, which was then called “MS Tûranor Planet Solar”, already circumnavigated the world. And only with solar energy. From 2015, the solar catamaran drove for the “Race for Water” foundation and bore the same name as the organization until 2021. Even as the “Race for Water”, the world’s largest solar ship drew attention to the pollution of the oceans.

It remains to be hoped that the revolutionary technology can be used in the conventional cruise industry in the future.