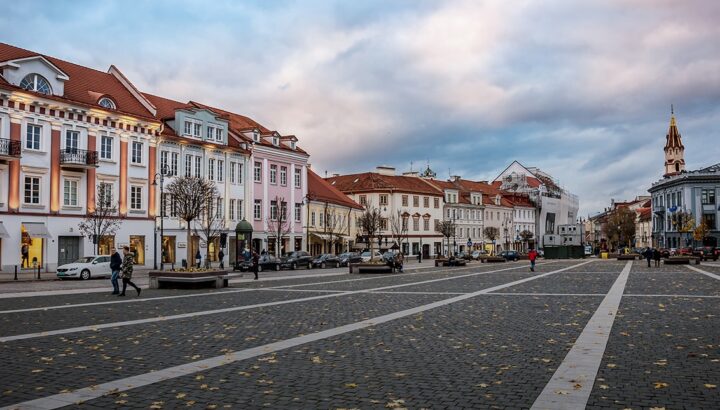 A trip to Lithuania should be on the agenda of those who enjoy untouched nature, beautiful forests and clear lakes. A small contrast to this is Vilnius, the capital of Lithuania. Dozens of churches await you here in an old town full of culture and history.

Vilnius (German “Wilna”) is the largest, most populous and most important city in Lithuania. The more than 800-year-old town looks back on an eventful history, which is particularly noticeable in the well-preserved buildings in the old town, which has even been a UNESCO World Heritage Site since 1994. One of Vilnius’ nicknames is Rome of the East. The city achieved this through the more than 50 churches that characterize the cityscape – one more beautiful than the other. If you are interested in sacred architecture or enjoy beautiful buildings, Vilnius is the place for you.

The area around Vilnius was inhabited long before that, but the city’s rise began when the legendary Lithuanian Grand Duke Gediminas decided to build his new capital here in the early 14th century. The future citizens were primarily recruited with religious tolerance. While Jews were being persecuted all over Europe, they found refuge in Vilnius, which is why the city was also nicknamed “Jerusalem of the North” for a long time.

The rise of the Polish-Lithuanian Union was followed by a period of decline caused by wars, fires and plagues. Lithuania and thus also Vilnius belonged to Russia from 1795 and later to the Soviet Union, which changed the population structure of the city significantly. Today, Vilnius is considered a Western-style and very cosmopolitan city. The venerable university, one of the oldest in Europe, attracts many young people from all over the world and tourism also contributes to making Vilnius a hip city. 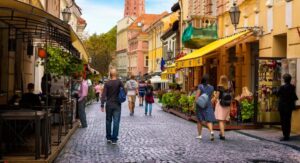 As the “Rome of the East”, Vilnius is primarily known for its churches. There are more than 50 of these throughout the city, many of them from the Baroque period. During a walk through the old town you can partially visit them and also discover some other interesting sights.

Castle of Gediminas / Places to visit in Vilnius

It is best to start your walk on the southern bank of the Neris and first see one of the most important symbols of Vilnius. On a 142 meter high hill stands the Gediminas Tower, the last remnant of the castle of the same name, which was built 700 years ago to protect the city from the Teutonic Knights. Those who climb the tower can enjoy a wonderful all-round view of Vilnius from its viewing platform.

Directly below the castle is the Vilnius Grand Duke’s Palace, the former residence of Lithuania’s rulers. The Renaissance-style chateau was modified several times and dismantled by Russia in 1801. However, as a sign of Lithuanian identity, the building was reconstructed and reopened in 2013. The premises can now be rented and used for events. There is also an archaeological exhibition in the basement with finds from the original building. The current interior, on the other hand, comes from various antiques that were purchased.

A few meters from the castle you will find the Roman Catholic Cathedral of St. Stanislaus, one of the most magnificent and important churches in Vilnius. The church was completed in 1801 and has a separate bell tower. However, several churches previously stood on the same site, the first of them from the 13th century. The cathedral looks classical from the outside, but inside it is reminiscent of a typical Gothic hall church. The bell tower once belonged to the castle complex, but was then converted. The cathedral was important as the place where Lithuanian princes were crowned and as their final resting place.

A little further towards the old town rises the Roman Catholic Church of St. Anne, a rare example in the Baltic States of the Flamboyant Gothic style, which is mainly known from France and Belgium. Certain shapes are artificially lengthened to create the impression of blazing flames. In the case of the Annenkirche, the red color underscores this impression. The interior of the church, on the other hand, is relatively plain, which is due to the looting and devastation during the Napoleonic era.

To the west of St Anne’s Church lies the campus of Vilnius University. It is one of the oldest universities in Europe and emerged in 1578 from the city’s Jesuit College, which had been founded a few years earlier. The university was also one of the centers of the independence movement in the late 1980s that eventually led to today’s independent Lithuania. Pay a visit to the campus and absorb the unique historical atmosphere. The individual buildings reflect all possible architectural styles such as Gothic, Baroque, Renaissance or Classicism. Be sure to also take a look at the magnificent halls of the library with their lovingly detailed wall and ceiling paintings.

In the southwest of the old town you will find the only remaining synagogue in Vilnius. Of more than 100 synagogues, the Choral Synagogue is the last to stand the test of time. It was built in 1903 as a gallery basilica with Romanesque and Moorish elements. In addition to a mixture of Romanesque and Moorish elements, the synagogue also has something worth seeing inside. The blue ceiling of the dome above the altar is a real eye-catcher.

A little further southwest is the Gate of Dawn. This is actually just a small remnant of the original city fortifications, more precisely a city gate with a small chapel above it. However, the icon in this chapel makes the gate a sacred place for Lithuanians, Belarusians and Poles. A black Madonna is shown, the “Mother of God in the Gate of Dawn”. She is the patron saint of Lithuanians and Belarusians and is considered miraculous. Therefore, thousands of believers make a pilgrimage to the old city walls of Vilnius every year and pray at this holy gate.

Anyone who has had a long stroll through the city of Vilnius will certainly look forward to a little relaxation. How about a hot air balloon flight over the city or a round as a spectator at Lithuania’s national sport, basketball? Those who are done with everything in Vilnius should also check out nearby Trakai. 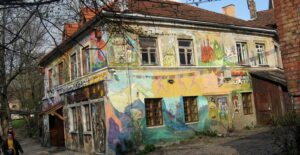 Do you still have strength for another walk? North of the Vilnia River lies the artists’ quarter of Užupis, which has established itself as an alternative “city within a city” in recent years. There are original festivals, concerts and performances as well as plenty of creative freedom for artists and musicians. If you stroll through Uzupis, you will probably also pass the unofficial constitution, which is written on a bronze plaque at the Užupio Kavinė café. This semi-ironic constitution grants the residents of Užupis, for example, the right to lounge around or to love a cat.

View of Vilnius from above

One of the most popular activities for vacationers in Vilnius is a hot-air balloon or blimp ride over the city’s rooftops. From spring to autumn it is possible to let the gentle breeze blow you over the city in a balloon and enjoy the incredible view. The best time to do your hot air balloon tour is in the evening hours. The colorful sunset bathes the red-tiled roofs of Vilnius in a particularly romantic light. A great experience for couples in love, but also for the whole family.

If you are near the St. Stanislaus Cathedral, then look around for a conspicuous floor plate between the main building and the bell tower. This bears the word “stebuklas” and was inserted by the local artist Gitenis Umbrasas. Stand on the plate, think of your heart’s desire and turn around your own axis three times. It is said that your wish will then come true. Because “stebuklas” means miracle and just a few months after the installation of the floor slab, Lithuania became independent again. Coincidence?

If you’re interested in watching a match of the Lithuanian national sport, find out if there might be a game going on at the Avia Solutions Group Arena in the north of the city. Many Lithuanians are crazy about basketball, while football and other sports tend to eke out a shadowy existence. Despite its small population, Lithuania is an international fixture when it comes to basketball. In 1997 the women and in 2003 the men became European champions and Lithuanian clubs are regular guests in the European competitions.

If Vilnius alone is not enough for you, then just a few kilometers to the west is the city of Trakai. In this are great lakes that invite you to go hiking or all kinds of water sports activities. You only need half an hour to get there by car. Alternatively you can take the bus. The moated castle of Trakai, one of the most impressive medieval fortifications, is also located in the lakes. It withstood attacks by Christian knights for centuries and now serves as a museum. There you will learn everything about the history of the castle and see excavated objects from the area.

Are you now in the mood for a holiday in Vilnius to see the heart of Lithuania? Then let’s go! For the “Rome of the East” you don’t need to do much preparation and it is quite cheap compared to other European destinations. We have put together a few tips for you so that you can fully enjoy your holiday.

Summer is definitely the best time for a trip to Vilnius. Then it is pleasantly warm, but not too hot, and there is usually little precipitation. Traveling in spring or autumn is also possible, albeit significantly cooler than in summer. Winters in Lithuania, on the other hand, can be very long, cold and wet.

Vilnius is not a very big city and can usually be easily explored as part of a weekend trip. However, if you want to hike in the surrounding area or do tours to Trakai or other cities in Lithuania, then of course you need more time and should plan at least a week for your trip.

Vilnius is known to be the capital of Lithuania. Since Lithuania is in turn a member of the European Union and also the Eurozone, the formal travel arrangements are very simple. Just grab your identity card and a few euros pocket money and off you go. Just keep in mind that Vilnius uses Eastern European Time, which is +1 hour to our time.

Arrival & getting around on site

The easiest and fastest way to get to Vilnius is by plane. The city has an international airport just a few kilometers south of the old town. Depending on the season, there are direct flights or connections via Warsaw or Riga. The train connection to Vilnius is not so cheap. On the other hand, if you want to drive, you can look forward to great cities along the way, such as Poznań and Warsaw in Poland. However, you have to bring enough time, because you need at least 12 hours for the 1,000 kilometers.

Within the city, the bus is the public transport of choice. In fact, there are three types of buses, namely city buses, express buses and trolleybuses. With the Vilnius City Card you can use all buses unlimitedly and save yourself the hassle of loading the ticket chip card required for the journey.

Not surprisingly, people in Vilnius speak Lithuanian, a Baltic language that is rarely found outside the country. Especially in young and hip Vilnius, you will get along very well with English. Russian and Polish can also be heard quite frequently.

As in all of Lithuania, the food in Vilnius is rather simple, down-to-earth and peasant in the best sense of the word. Anyone who has had enough of the chic restaurants in the trendy districts and really wants to eat Lithuanian should try the following dishes:

One of the local beers is popular with the meal. In addition, the dark and strong Lithuanian bread is almost always part of the meal. Traditionally, it is baked over calamus straw and is broken or torn rather than sliced.