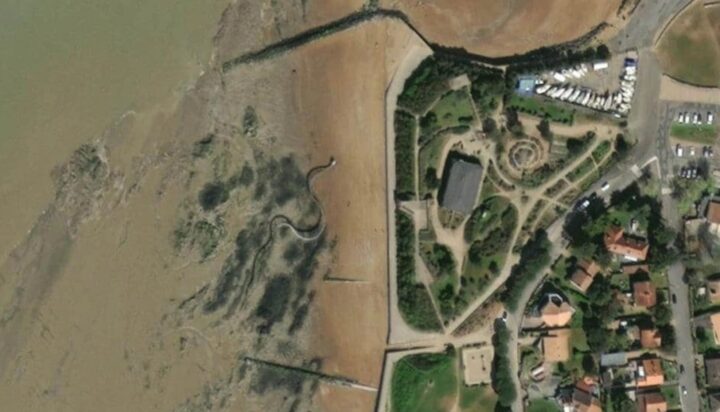 What is hidden behind the gigantic “snake skeleton” off the French coast?

In front of the French coastal town of Saint-Brévin-les-Pins, Google Maps images show a gigantic “snake skeleton” that is causing a stir on TikTok.

Using the features of Google Maps, many find the best restaurants in the area or use the detailed navigation directions. But with the help of satellite images, bizarre things can often be discovered. In southern Brittany in France, one such feature has even risen to second place in the list of places most frequently visited with Google Street View in recent weeks: “Serpent d’Océan”, which translates as “sea snake”.

“Serpent d’Océan”, the snake skeleton in France, is less terrifying than the name might suggest. A quick Google search reveals that the supposed sea monster is actually an art installation.

The 130 meter long aluminum sculpture has stood in front of the French coastal town of Saint-Brévin-les-Pins for ten years. It was created in 2012 as part of the Estuaire Festival and was installed in the same year at the mouth of the Loire River in the Atlantic. At low tide, the snake emerges from the water – a spectacular sight that attracts hundreds of tourists every year.

Who is behind this?

Stuffed elephants, live scorpions, a giant octopus and the gigantic snake skeleton in France: According to “Spiegel”, the Chinese artist Huang Yong Ping is internationally known for these works of art. Born in Xiamen, China in 1954, he became an indispensable figure in the Chinese avant-garde art movement in the 1980s, until he emigrated to Paris in 1989. Because of the cultural collisions and differences he experienced in his life, Yong Ping often explores the paradoxes of East-West duality in his works. This is also noticeable in “Le Serpent d’Océan”. Important to Chinese culture, the snake motif contrasts with the sculpture’s location in its adopted home of France.

Yong Ping died in Paris at the age of 65. His works continue to be on display for art lovers in many of the world’s most famous museums. These include the Museum of Modern Art (MomA) in New York, the Guggenheim Museum in Bilbao, Spain, and the Center Pompidou in Paris. When visiting any of these museums, one should take the time to look at his works.

Significance of the snake skeleton

ong Ping embodies both his culture and beliefs with this sculpture. Emerging on European shores from one of the main characters of Chinese mythology, he focuses on identity and cultural hybridity. With his art he wants to create a connection between art, culture and political awareness – the snake should also draw attention to environmental problems.

Yong Ping shows that people are torn between their creative abilities and destructive impulses. The “washed up” skeleton of the boa illustrates the destructive nature of marine pollution.

The coastal town of Saint-Brévin-les-Pins

“The pearl of southern Brittany”: This is how locals describe the seaside resort of Saint-Brévin-les-Pins, which lies on one of the most beautiful stretches of coast in the Loire-Atlantique. There are miles of beaches surrounded by endless sand dunes and pine forests – ideal for nature lovers and families. Incidentally, the beaches of Saint-Brévin-les-Pins have been awarded the European “Pavillion Bleu” label, which guarantees good water quality.