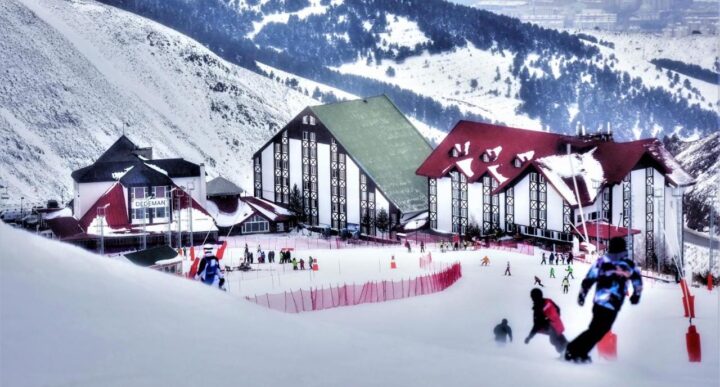 Palandöken, one of the first addresses that come to mind when winter tourism is mentioned in Turkey. / Palandöken Ski Resort Travel Guide

Palandöken is located 5 kilometers south of Erzurum city center. Palandöken Mountain, one of Turkey’s most popular ski resorts, is 3,125 meters high and is included in the tectonic mountain group. Palandöken, which is one of the country’s top quality and leading ski centers due to the amount of snow accumulated especially on the northern slope in winter, also has the longest ski track.

The name of this mountain, which takes place in many myths told in Anatolia, comes from the combination of the word “palan”, which means donkey saddle, and the word “shed”. The Palandökenesis flower, which is only found here and grows in May, is also one of the symbolic elements of the region. Although it does not have a great difficulty in terms of climbing, it can be dangerous due to some steep slopes of the mountain and the harsh winter season in the region. The highest point of Palandöken, which hosted the World Inter-University Winter Olympics in 2011, is called Büyükejder Hill.

Hosting thousands of tourists every year, Palandöken spends almost half of the year under the snow. Palandöken, which is under the snow from the end of November until the beginning of May, is especially ideal for winter sports enthusiasts. Especially in January and February, the compelling climatic conditions should be taken into consideration. Before giving detailed information about Palandoken, let’s remind you that you are in Erzurum, which is famous for its cag kebab and oltu stone.

How to go to Palandoken? Palandöken Ski Resort Travel Guide

You have several options for transportation to Palandoken. The first and most preferred one is to arrive in Palandöken after landing at Erzurum Airport, by renting a car from here or by taking a shuttle service for about half an hour. If you are going to the city by intercity bus, you can use the public buses going to Palandöken when you get off the bus station or rent a car again. In addition, there is the possibility of transportation to Erzurum via the railway line via Erzincan, Malatya and Kars. There are daily expeditions to Erzurum via the Eastern Express and the New Eastern Express.

There are tracks suitable for all levels in Palandoken. There are 22 tracks separated according to difficulty levels in the ski center, where there is the opportunity to rent equipment for skiing. Among them, 8 are easy tracks, 9 are intermediate tracks, and 3 are advanced tracks. There are also 4 road tracks in the center. In addition, another feature of the center is the 28-kilometer Olympic track for slalom and snowboard enthusiasts. In addition, thermal water points and spa services are offered at the hotels located in the ski center, where entertainment opportunities such as paintball and ATV racing are also available. Therefore, you can relax in the thermal pools after spending your day in the ski resort after a pleasant breakfast that starts with the mountain view.

Places to visit in Palandoken

Although Palandoken is one of the most popular destinations for winter sports and ski tourism, what you can do here is not limited to this. When you come to Palandöken, there are many historical, natural and cultural beauties that you should not return without seeing.

Yakutiye Madrasa: The construction of Yakutiye Madrasa in the city center dates back to 1310. The madrasah, which was built by Emir Hoca Cemalettin Yakut at that time, serves as the Museum of Islamic Works today.

Double Minaret Madrasa: This building, which is considered among the symbolic structures of Erzurum province, is quite magnificent with its tile decorations reaching 26 meters. The construction of the madrasa dates back to the 13th century. The height of the madrasah, which was built by Alaeddin Keykubat for his daughter, reaches 26 meters.

Aziziye Bastion: The purpose of this bastion, which was built by Sultan Abdulaziz, was to ensure the security of Kars during the war between the Ottomans and the Russians. There are many legends about this building, which has a very important place in the history of the city. The most famous among them belongs to Nene Hatun. According to the legend, Nene Hatun, who received the news that the Russian soldiers killed the guards in the bastion, left her baby in her arms and ran to the bastion with a line in her hand. Based on this story, there is a statue in front of the bastion.

Atatürk Museum: Erzurum is one of the cities of great importance during the history of the War of Independence and the founding years of the Republic. The mansion where Mustafa Kemal Atatürk stayed before he went to Samsun has now been converted into a museum where the belongings are preserved.

Tortum Waterfall and Tortum Lake: Tortum Waterfall, one of Turkey’s most magnificent waterfalls, is among the natural beauties of the region. Although this majestic waterfall, 20 meters wide and 50 meters high, is located 35 kilometers from the center, it is one of the addresses you should definitely stop by when you come to Palandöken.

Covering an area of ​​70 kilometers long and 25 kilometers wide, the Palandöken Mountains were declared a Winter Tourism Center in 1993. In this center; There are 3 ski resorts consisting of Erzurum (Hınıs) Strait, Konaklı and Gez Plateau. Erzurum Strait is also known as Palandoken Ski Center. Palandöken Ski Center has two tracks registered by the International Ski Federation (FIS) for slalom and giant slalom competitions.

Located in the south of Erzurum, at an altitude of 3 thousand 176 meters, Palandöken is one of the most important ski centers in the world, with its snow quality and long tracks, suitable for skiing for 5 months. Hosting the 25th World Universities Winter Games in 2011, Erzurum has become one of the new attraction centers of winter tourism in Turkey and the world. The tracks in Palandöken, which allows even the winter Olympics to be organized, are among the longest and steepest tracks in the world. Palandoken was ranked 18th among 41 ski resorts in the world determined by the New York Times Newspaper.

In Erzurum, where snowfall manifests itself in October-November, the ski season starts from November and lasts until the end of April. Due to its climate, Palandoken maintains its “powder snow” feature that allows skiing throughout the whole ski season. 10 chair lifts, 1 teleski, 2 baby lifts and 1 gondola lift serve on the slopes of the Palandöken Ski Center, located between 2000-3176 meters. While reaching Ejder Hill with a 1000-meter climb with the gondola lift, in Palandöken; There are 7 easy, 8 medium, professional (hard) and 4 scenic tracks. On all tracks, approximately 12 thousand people are offered the opportunity to ski at the same time.

Palandoken Ski Center; While it offers extremely suitable tracks for alpine skiing and snowboarding, it also creates an alternative for different types of tourism such as paragliding, mountaineering, snowtube and paintball, apart from skiing. The surrounding of Palandöken Mountain, with its natural park appearance, offers different beauties in four seasons as a sightseeing, picnic and viewing area.

Palandoken is also a congress tourism center. Palandöken Ski Center, where avalanche prevention and artificial snow systems are located, is only 5 kilometers away from the most modern hospitals of Erzurum, a health city. Palandöken Ski Center, which can serve skiers of all levels, has hotels to stay in and many 3 and 2 star hotels in the city center. The ski center is 15 kilometers from the airport and 4 kilometers from the city center. Transportation to the ski center is provided by Erzurum Metropolitan Municipality buses on holidays and by private vehicles and taxis on other days.