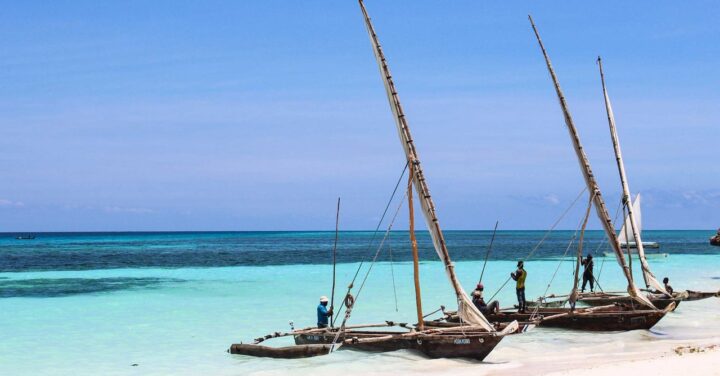 Currency and money might not be the most exciting, but it is certainly an important topic before your trip to Zanzibar.

The official currency in Tanzania is the Tanzanian Shilling (TZS). One euro is currently around 2,730 shillings. Since paying with bank cards is not yet very common on the island of Zanzibar, you should carry enough cash with you. In addition to the local currency, most shops and restaurants also accept US dollars, which you can bring with you from Germany. However, the import of the Tanzanian shilling is prohibited. To get cash on site, you can alternatively exchange euros or dollars in exchange offices or at banks or withdraw money from ATMs. Both are mainly only possible in Stone Town and at the airport.

The Best Beaches in Zanzibar: Top 5
Best time to go to Zanzibar
Zanzibar Travel Guide / Top 10 things to do in Zanzibar

A Tanzanian shilling is 100 cents, officially called Senti. However, due to high inflation, there have been no senti coins since the 1990s, as their value was simply too low. An advantage for you as a traveler, because the conversion is at least a little easier in even amounts.

Speaking of conversion: An extremely important piece of information about the currency in Zanzibar is of course the exchange rate. You currently get around 2,730 Tanzanian shillings for one euro, so one shilling is far less than one euro cent (as of September 2021). This rate of exchange naturally fluctuates over time and from bank to bank and bureau to bureau. Always use a currency converter to find out the current official exchange rate before you leave, so that you have an idea of ​​whether you are being offered a good or bad price when you are there.

The History of the Tanzanian Shilling

The Tanzanian shilling has been around since Tanzania gained independence in 1964. Previously, the local currency was the East African shilling.

Until the 1980s, the first Tanzanian shilling coin series consisted of senti coins of 5, 10, 20 and 50 senti and a 1 shilling coin. This was followed by coins of 5, 10 and 20 shillings. It was not until 1994 that coins with denominations of 50, 100, 200 and 500 schillings gradually came into existence. The latter has only been around since 2014. These four are the only Schilling coins still in use today, Schilling-Senti coins no longer exist.

This development history of the national currency of Tanzania well illustrates the level of inflation in the country. In addition to the depreciation, another consequence of this is that you now have to carry far larger amounts of money with you when traveling through Zanzibar than you would have had 50 years ago.

The most common means of payment in Zanzibar and in all of Tanzania is still cash. Since Zanzibar is heavily influenced by tourism, it is now also possible to pay with an international credit card (e.g. Visa, MasterCard, American Express) in some places and in larger hotels. But beware: relatively high fees of around 10% are often charged for this.

Traveler checks are extremely rarely accepted. If they are accepted, they are often only exchanged for a fee. The cheapest, safest and most popular payment method is therefore still cash. You can also easily pay for larger problems such as safaris or excursions in cash.

What currencies are accepted in Zanzibar

As in many African countries, the US dollar (USD) has established itself as an unofficial parallel currency in Tanzania. So you can easily pay for almost everything in US dollars on your trip to Zanzibar. The few exceptions include some local businesses that only accept local currency. Menus and other prices are often given not only in TZS, but also in US dollars.

In some places only US dollars are accepted. This includes, for example, the visa fee and the exit fee at the airport, customs duties and entry into national parks. So have at least a small amount of your travel budget in USD with you.

Note, however, that only US dollar bills printed after 2006 are accepted across the country. You can recognize them by the large head of the President on the ticket. The only exception to this is one-dollar bills with a small presidential head.

The euro tends to be even more popular with locals than the US dollar. In most cases, wherever you can pay in dollars, you can also pay in euros. But beware: As a rule, the euro is equated one-to-one with the US dollar. So if something is advertised for 10 USD, you would also pay 10 euros. That’s quite a losing proposition at the current exchange rate, which is why you’re cheaper with US dollars.

In addition to the US dollar and the euro, most shops and restaurants also accept the British pound.

How to get cash in Zanzibar

As already mentioned, it is advisable to always have enough cash with you when traveling through Zanzibar. But how do you get this cash?

This is because importing Tanzanian shillings from abroad is strictly prohibited (as is exporting them, although some travelers would like to take some notes and coins with them as holiday souvenirs). So you can’t yet exchange money at the bank at home and take it with you on vacation.

Instead, you have two options on site: Withdraw Tanzanian shillings from an ATM or exchange money in exchange offices. Below we explain the advantages and disadvantages of both options. A third option is to order US dollars in Germany and take them with you on the trip. As already mentioned, you can use it to pay almost anywhere.

The idea that sounds most convenient is to simply go to the ATM in Zanzibar to get cash. However, you must not forget that Zanzibar is not Germany and you will not find an ATM on every corner.

In fact, the ATM network is still fairly manageable. There are ATMs at Zanzibar Airport and in the capital, Stone Town. There is also a vending machine in Nungwi near the police station and at a gas station in Paje. In all other areas of Zanzibar you will unfortunately not be able to find an ATM.

The machines that exist only give out Tanzanian shillings. You need an international credit card for this. Giro cards (e.g. Maestro) are only very rarely accepted in Tanzania. Withdrawal fees vary depending on the machine and bank card.

However, if you have an account with a Cash Group bank, you can use these bank cards to withdraw money free of charge at Barclays Bank. The Cash Group includes, for example, Deutsche Bank, Postbank, Commerzbank and Dresdner Bank.

In addition, most ATMs in Zanzibar have a limit on how much cash you can withdraw. This is usually the equivalent of between 150 and 200 euros, but sometimes even lower. If you want to withdraw more money, you have to perform several operations in a row (and of course pay fees several times).

What you should also keep in mind is the risk that an ATM could be empty. This can even happen at the ATM at the airport. If you have a stopover at an airport on the mainland of Tanzania, it is best to withdraw a few Tanzanian shillings there.

In bureaux de change you can exchange cash in other currencies such as US dollars or euros for Tanzanian shillings. However, there are also no exchange offices and banks on the entire island, but currently only in the capital Stone Town and at the airport.

Exchange rates in stores tend to fluctuate, so use a currency converter to get an idea of ​​a fair rate. With the local currency you always get the best price in shops and restaurants.

Since it is not always possible to exchange back into euros, try to exchange only as much money as you plan to spend. Finally, exporting the currency out of the country is officially banned.

It is also good to know that the exchange rates for smaller amounts or bills are often worse than for larger bills. At best, exchange bills larger than 20 dollars or euros. Also check the quality of the bills issued, as broken or torn bills are not accepted at every location.