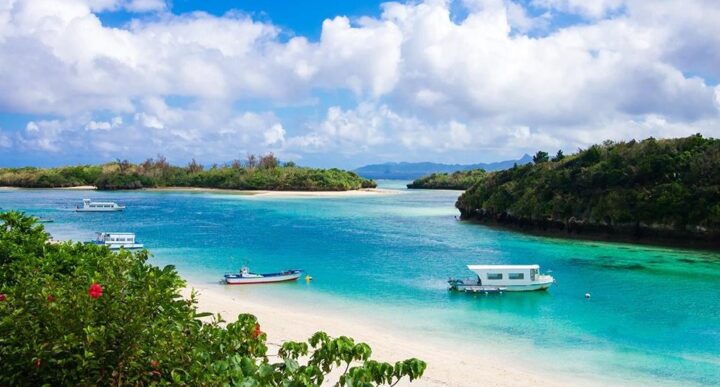 10 of the most beautiful islands in Japan

Every Japan fan knows the four main islands of the country: Hokkaido, Honshu, Shikoku and Kyushu – but not only there there is a lot of wonderful things to see and marvel at in the land of the rising sun! In our article we would like to introduce you to the 10 most beautiful islands in Japan away from its main islands.

It doesn’t just start with a single island, but actually with an entire prefecture together with its main island of the same name: the beach and holiday paradise of Okinawa between the East China and Philippine Seas. Known for its idyllic, white-sand beaches, clear sea, fascinating coral reefs and ever-summer tropical climate, Okinawa is the ideal year-round place to combine once-in-a-lifetime beach adventures with a trip into Japanese culture. You can also learn more about the importance of Okinawa during World War II on the more than 150 islands in Okinawa, or go in search of whale sharks and manta rays in the open sea.

Ishigaki also belongs to Okinawa Prefecture and is located about 300 kilometers southeast of Okinawa Honto. The island is a true paradise for all nature lovers: not only can you surf, snorkel and dive through uniquely beautiful – and extremely rare – blue coral reefs right off the coast, but on land you can also hike the picturesque slopes of Mount Omoto and If you are not averse to a small boat trip, you can take the ferry to the nearby island of Iriomote and visit the national park of the same name. If you are really hungry after all the adventures, you can finally treat yourself to delicious local delicacies with fresh fish and other seafood in Ishigaki town.

If you want to get a taste of art and culture in addition to impressive landscapes, you’ve come to the right place on the next Japanese island on our list: Naoshima in the middle of the Seto Inland Sea. In the island city, one exciting museum follows the next, so you should definitely visit the underground Chichu Art Museum with its idyllic garden, the Benesse House, which is dedicated to contemporary art, the Ando Museum, which is particularly interesting for architecture fans, or the iconic pumpkin -Stop by sculptures on the coast. By the way, from Naoshima you can also be in the city of Okayama on Honshu in a short time, where other exciting sights, such as the city castle, await.

Our next island worth seeing is around 50 kilometers south of Kyushu, the southernmost main island of Japan. Yakushima has nothing to do with big cities, but will delight all lovers of exotic fauna and flora all the more: Here you can hike through picturesque cedar forests or even become a real cedar forest expert in the Yakusugi Museum, watch turtles on the beach of Nagata Inaka-hama Watch them hatch, visit the ancient Jomon Sugi tree on Mt. Miyanoura, or learn more about the island and its inhabitants – human, animal and plant – at the Environmental and Cultural Village Center. Finally, be sure to stop by the Yakushima Orchard on Yakushima’s south coast and snack on the literally thousands of exotic fruit trees there.

A whole “family” of islands can be found in the Nampo-shoto group of islands, southeast of Japan’s main islands – the largest of which is Chichijima or “Papa Island”. The natural paradise, which is just 23.5 square kilometers in size, is located around a thousand kilometers south of Tokyo in the middle of the Pacific and offers you, among other things, picturesque beaches such as Kominato Beach or Jini Beach, but also the Ogasawara National Park, which is worth visiting, which is purely political despite the large distance to Tokyo itself. You can also take a ferry or rent a boat to the other beautiful islands in the archipelago, including “Mama Island” Hahajima, “Little Sister Island” Imotojima and “Big Sister Island” Anejima in the south, as well as the “Big Brother Island” Anijima and “Little Brother Island” Ototojima to the north.

From the far south-west we now head to the far north of Japan, to the island of Rebun in the Sea of ​​Japan, around 50 kilometers west of the northern tip of Hokkaido. Like the rest of northern Japan, Rebun is characterized by unique mountain landscapes and is known for the area around the mountain of the same name and the local eight-hour scenic hiking tour with fantastic views, which you can cover in two sections of four hours each. But not only hikers will be happy here, Rebun is also culturally interesting and offers several exciting museums, above all the Rebun Town Historical Museum in the southeast of the island.

Just southeast of Rebun and easily accessible by ferry from Rebun town is the next island worth seeing in Japan that we would like to introduce to you: the island of Rishiri. Rishiri also impresses with its impressive mountains and unique views, which you can explore extensively on hikes, as well as exciting cultural sites and museums that are extremely well worth seeing, but also throws hot springs into the pot for perfectly relaxing hours and culinary adventures. One of the local specialties that you should definitely try is sea urchin, which you can taste at Kamii Beach Park on the west coast of Rishiri, but other dishes made from freshly caught fish and seafood also attract hungry tourists to Japan.

At the very other end of Japan’s main islands, west of Nagasaki on Kyushu, next is an island that’s equal parts chilling and fascinating: the abandoned mining island of Hashima. Often called Gunkanjima or “Battleship Island”, Hashima is full of eerie ruins that can be explored on – very safe – guided tours of around 60 minutes. The small island is an extremely popular location for photo shoots and, thanks to its unique atmosphere, is guaranteed to remain unforgettable. Attention: Since the entire tour of the island is covered on foot, you should be fit for it. People with walking or similar problems are sometimes not taken on the tour.

The next island can be your personal hell or your personal paradise – depending on how allergic you are to cats or how much you love the cute balls of fur. Nagahamacho Aoshima in the middle of the Seto Inland Sea of ​​Ehime Prefecture is rightly also called Cat Island – after all, around ten times as many house tigers live here as there are human residents. The tiny island is just 1.5 kilometers long and 250 meters wide and, in addition to the countless furry friends, also offers two interesting shrines: the very simple Ebisu shrine on the east coast and the beautiful Aoshima shrine a little further west.

Also located in the Seto Inland Sea, this time in the north of the body of water in close proximity to the city of Hiroshima, is the last stop on our list of the most beautiful islands in Japan: Itsukushima. The island is best known for its traditional 12th-century shrine, the entrance to which has a unique feature: the impressive red torii gate stands a little off the actual coast and is flooded by water at high tide. In addition to the shrine, Itsukushima also has other interesting cultural and religious sites, including the Daishoin Buddhist Temple complex or the Senjokaku Pavilion, several exciting museums such as the Miyajima Face and Folk Museum or the Mt. Misen Observatory, as well as scenic parks and natural landscapes , which invite to hikes and walks.