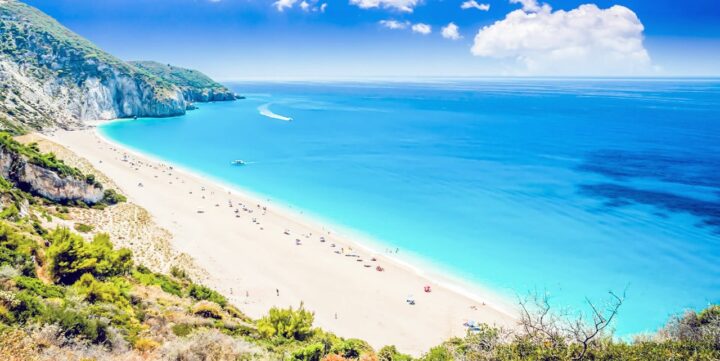 Lefkada Travel Guide – 10 things to do on the Greek island

If you ask locals in Greece about the most beautiful beaches, you will often hear the name of the Greek island of Lefkada. Here you can find out what other highlights there are besides dream beaches on Lefkada.

Lefkada means “the white one” and is part of the Greek islands in the Ionian Sea. The best known of the Ionian Greek islands are Corfu and Zakynthos, but Lefkada is still relatively unknown to German holidaymakers. Those who like Greek islands with less mass tourism will be interested in Lefkada. In addition to the most beautiful beaches of Lefkada, we present other highlights such as top sights, places and travel destinations on the white islands.

Porto Katsiki is not only one of the most beautiful beaches in Lefkada, but also one of the most beautiful beaches in Greece. Like many beaches on the Croatian and Ionian islands, Porto Katsiki is mostly pebbly. Thanks to the clarity of the water, the beach has a high profile in Greece and also on Instagram! Anyone who asks locals about the highlights of Lefkada will often hear Porto Katsiki, even if they have never visited Lefkada themselves. The beach is often featured on local souvenirs, as Porto Katsiki is truly one of Lefkada’s top attractions. The name of the beach Porto Katsiki means goat port. Due to the extremely steep walls, only goats could reach the beach in the past. Speaking of which, you can reach the beach by rental car, bus or water taxi. There is no entrance fee to enter Porto Katsiki, but there is a parking fee. Parasols and loungers are not free, but they are not compulsory.

If Lefkada has one thing in abundance, besides chirping crickets, it’s definitely stunning beaches. Another highlight of Lefkada is Egremni Beach. On the way to Porto Katsiki you drive off the east coast of Lefkada and from there you can admire the beach of Egremni. The view down to the beach alone almost deserves its own entry as a highlight of Lefkada. Although Egremni is one of the most beautiful beaches in Lefkada, like all beautiful things in life, it is difficult to reach. Egremni Beach can only be reached by water. Don’t worry, resort towns like Nydri and Vassiliki have water taxis and boat tours that can take you to the beach. But beware, because unlike the beach at Porto Katsiki, there are no sanitary facilities or restaurants in Egremni. You often have the beach all to yourself, what more could you ask for?

Similar to one of the most famous Greek islands, Santorini, Lefkada is known for its picturesque sunsets. As the mountain range of Lefkada rises from the east to the west sea side, one can experience a majestic sunset from many places. Beaches like Porto Katsiki and Egremni are worth staying until sunset. The same applies to several restaurants on the west side of Lefkada. They also use the sunset to their advantage, so restaurants on Lefkada offer terraces with a view of the wide sea. Rachi is one of the most famous restaurants with a magnificent view. Treat yourself to dinner in a Greek tavern above the open sky and with.

4. Discover the mountain villages of Lefkada

Are you tired of lying lazily on the beach and need a little more exercise? Lefkada offers enough activities for the sports lovers among you! For example, how about a hike through the mountain villages of Kavalos, Pinakochori and Asporgerakata? There are various paths between the villages that take you to individual natural spectacles and sights. You will find authentic fountains from the time of the Ottoman Empire near Asprogerakata, near Fyra. Of course, the mountain villages as they are built amphiterather-shaped on the slopes are a sight in themselves! The gorge of Melissa is probably one of the best known and most beautiful places. The gorge abounds with many small streams and natural waterfalls. However, don’t be surprised if the wooden paths stop abruptly. The paths are not the newest and often only consist of sandy paths. The best way to reach the mountain villages is to drive along the main Lefkas-Vassilikis road and follow the signs.

5. Make a trip to Preveza, Parga and Epirus

Although Lefkada is an island, it is close to mainland Greece and also connected by a bridge. So if you don’t want to fly or travel to Lefkada by ferry, you can also reach the Ionian island by rental car. However, the bridge that connects Lefkada to the mainland only opens every hour. So you may have to wait a bit. Take a road trip around the Ambracian Gulf and discover the picturesque small towns of the Epirus region and western Greece. The cities of Parga and Preveza are definitely among the most beautiful places in this region around Lefkada. This is at the foot of a peninsula and you can already see the action directly when approaching Preveza Airport. In Preveza it is worth strolling along the old port, because it has an extremely romantic character.

6. Lose yourself in the Venetian olive grove of Lefkadas 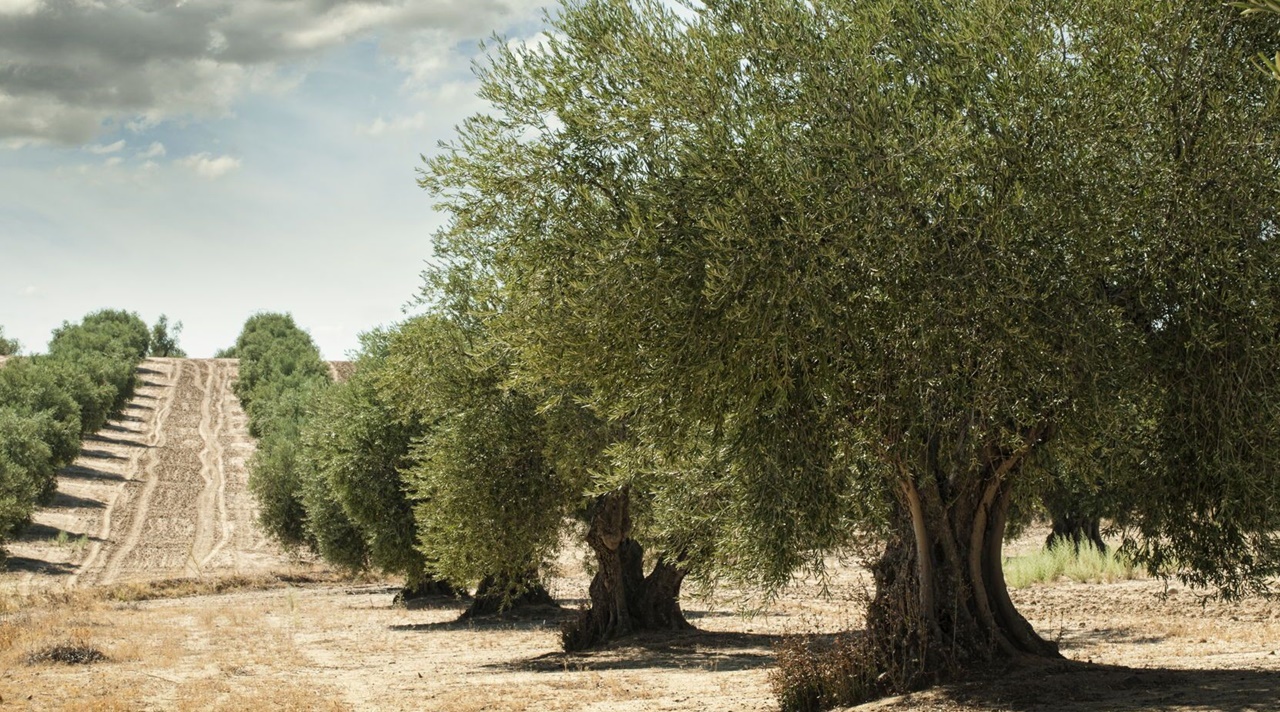 Did you know that the Greeks have the highest olive oil consumption in the world at 24 liters per capita? Olive oil and olives are also extremely popular on Lefkada and are locally produced. This brings us to another beautiful spot on Lefkada, the Venetian Olive Grove. This is located on the outskirts of the capital of Lefkada and can be visited freely. Here you will find a huge olive grove with olive trees, some of which have been there since the 17th century. In a census from 1770, 44,169 olive trees were counted, today there are unfortunately only about 5000. Although the olives are also harvested, they are now considered an environmental monument and may not be felled. According to records, the olive trees were planted in 1684 during the Venetian rule of Lefkada. However, the name Venetian olive grove does not come from the rule, but from the fact that the Venetians helped with the planting.

7. Explore the resort of Nydri

Although Lefkada Town is the largest town on the island, Nydri is sometimes even more popular with visitors to Lefkada. The small town of Nydri is located on the east coast of Lefkada and is situated in a quiet bay. Those who come to Lefkada by ferry will most likely dock in Nydri as Nydri has an important passenger port. For many first-time visitors to Lefkada, Nydri is therefore also the first choice as a holiday resort. Arriving at the port alone is one of the most beautiful highlights of Lefkada. The small town appears out of nowhere behind two small islands in the background, in a bay of jade-colored water. In Nydri there are a number of charming restaurants and bars along the harbor and main street. Be sure to take a little trip to the opposite end of the peninsula from the bay. Besides sparkling beaches and the chapel Agia Kyriaki, you can also visit the tomb of the famous German archaeologist Wilhelm Dörpfeld.

8. Take a boat tour around Lefkada

The local boat tours allow you to visit many beautiful places and highlights of Lefkada in a short time. From Nydri it is worth taking a boat tour around the smaller islands around Lefkada. Each of these islands has its own story to tell. First there would be the island of Skorpios. This is about 2km from Nydri and now belongs to the Russian billionaire family Rybolovlev. Skorpios belonged to the legendary shipowner Aristotle Onassis, who bought it and made it the meeting place for international guests. Further south of Lefkada is the island of Meganisi with the Papanikolis Cave. It is the second largest cave in Greece – so big that ships have often parked in it to protect themselves from storms. The cave got its name from the submarine Papanikolis Y-2. During World War II, the U-boat hid in the cave and sank entire fleets as it went undetected until the end of the war.

In the south of Lefkada, about 38 km from Lefkada town, lies the village of Vassiliki. Vassiliki is by far one of the most idyllic and beautiful places in Lefkada, but there is another special feature here. Vassiliki is particularly known for windsurfing, because strong winds prevail in the bay of the same name in the village. The curious thing about it is that because Vassiliki is situated between two hills, it is sheltered from the wind. The winds only focus on the water, which means that almost perfect wind conditions are achieved. Word got around quickly, because Vassiliki is now one of the best surfing spots in Europe. Not only the residents of Vassiliki quickly recognized this natural advantage, but also many expats. There are several schools for water sports on the beaches of Vassiliki, some of which even offer their lessons in German. For those less interested in windsurfing or other water sports, Vassiliki also offers camping, with one of the best campsites in all of Lefkada.

10. Hikes from Vassiliki to Agiofili Beach

The beaches on Lefkada are so beautiful that we finally take a closer look at a dream beach! If you are already in the surfing town of Vassiliki, then it is worth visiting Agiofili beach. Agiofili Beach is deep in a bay, surrounded by pine trees and has turquoise waters. However, to get to Agiofili Beach, you have to go on a little expedition! This should please the active ones among you, because the route from Vassiliki to Agiofili Beach is one of the most beautiful hiking routes in Lefkada! The beach is about a 50 minute walk from Vassiliki and getting there is a real highlight of Lefkada. On your way to the beach you will pass lonely bays, wild fruit trees and photo-worthy vantage points. Just before reaching the beach, don’t be put off by the lattice fence, the beach is accessible! To the left of the locked fence you can simply get to the other side.