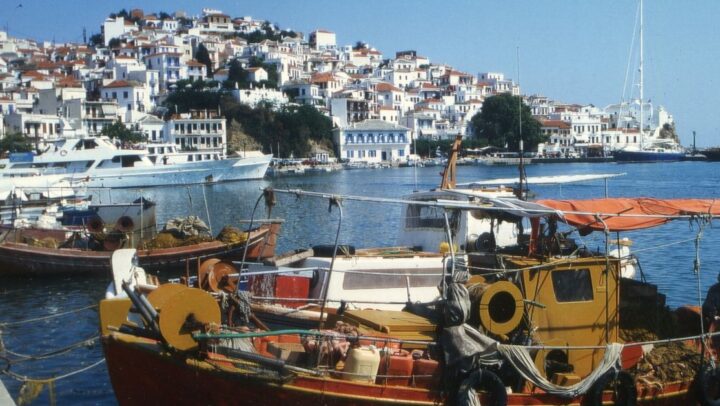 Skopelos: Away from the mainstream

Street names are the exception here, house numbers are a rarity, and nobody needs nameplates on the blue or red-washed doors.

The postman knows everyone anyway, and if in doubt, everyone else will ask their way through to their destination. It has always worked that way in Skopelos Town. There’s no reason to change anything about it.

Wooden balconies stretch out over the roofs of the whitewashed houses in the old town, and owls fly their courses in the sky on clear, starry nights. Cats play in the light of the lanterns in front of the front doors. In the distance the last lights of the taverns at the harbor shimmer. Snatches of verses from Greek hits blow over from somewhere. The loudest sound then is the dull thumping of a ripe orange from the tree in the small courtyard.

Ferries and speedboats depart from the island of Skiathos several times a day – at least a 45-minute drive to another world with far less tourism than on the neighboring island. Because Skopelos itself has no airport. In front of the small old town houses, which stretch up the slope like boxes stacked on top of each other, locals sit together and chat. There are tables and chairs in front of tiny taverns. The deeper you go into the old town, the more original it becomes.

Many private cottages are rented to tourists on the Sporades Island, about 150 kilometers north of Athens as the crow flies, some of them right in the historic center of Skopelos Town. On average, they are around 40 to 50 square meters in size, two to three stories high, with their own kitchen, shower, toilet, olive wood-fired fireplace for the winter months, with an inner courtyard or balcony – none with everyday furnishings, all shaped by the taste of the owner, who is his own spend vacation there.

“The houses,” says Alexander Roros, who manages some of them, “often belong to Greeks who were born here on the island and now live in other parts of the world. You only come back to your home island for a few weeks a year. Why leave the houses empty the rest of the year?”

Greener than the neighboring islands, Skopelos has cliffs and beaches, groves of almond, plum and fig trees, dense forests and a network of paved roads covering less than 50 kilometers on the 96 square kilometer island. Hikers trudge along narrow sandy paths through the mountains, through olive groves and stop at small monasteries. Clotheslines and sagging power cords are stretched from house to house. Children play football on small pitches. Grocery stores offer sheep’s cheese, olives, wine and small everyday delicacies. A few dozen meters further, turquoise Mediterranean waves beat against the cliffs, accompanied by the chiming of the bells of the Faneromeni church.

Sometime during the night the last lights go out. The bottle of wine on the balcony has been emptied, the heat of the day gone. A propeller circles above the bed in the holiday home. The wind makes the curtain on the open balcony door dance, and the next morning a bird concert is the overture to the new day.

Particularly beautiful but remote is Agios Ioannis Beach, in the vicinity of which scenes for the film “Mamma Mia” with Meryl Streep were filmed. If you like, you can climb up the many steps to the Agios Ioannis church on a cliff and have a magnificent view from up there.