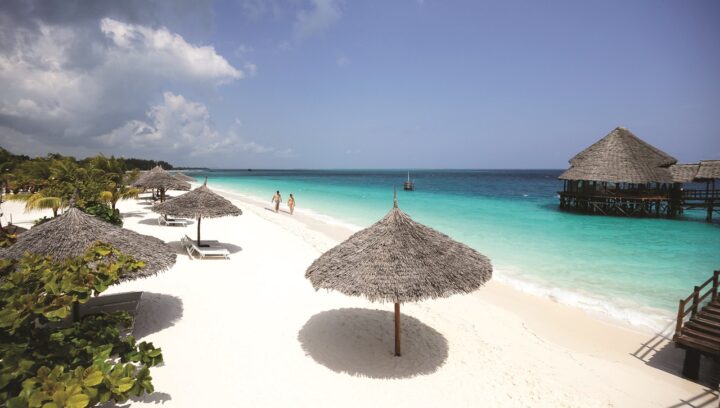 Best time to go to Zanzibar

Zanzibar is an archipelago of islands off the East African coast in the Indian Ocean. The archipelago consists of the main islands of Unguja, called Zanzibar, Pemba and several small islands. / Best time to go to Zanzibar

Zanzibar is a semi-autonomous part of Tanzania. When Zanzibar is mentioned in this article, it is about the main island of Unguja, not the entire archipelago. Due to its proximity to the equator, Zanzibar has a tropical climate. The north-east and south-west monsoons have a strong influence on the climatic conditions on the island. They ensure two rainy seasons and two dry seasons. The short rainy season lasts from November to December. During this period, the northeast monsoon is responsible for the weather changing rapidly and several times. There is an increase in short and heavy precipitation.

In the long rainy season, from March to May, it rains more often than in the short rainy season. Temperatures during the day are 30 degrees Celsius or higher. Humidity is high and rainfall is short but heavy. This is due to the southwest monsoon. The rainy seasons are opposed to the dry seasons.

The so-called short dry season lasts from January to February. The big dry season takes place from June to October. Rain rarely falls in the dry season and average daytime temperatures are around 25 degrees Celsius, usually even higher. At night it cools down slightly. In the climate table for Zanzibar below you can see all the important values ​​for the months of January to December. From the maximum and minimum temperatures to the hours of sunshine per day and the rainy days per month as well as the water temperature of the Indian Ocean.

Best time to go to Zanzibar

As in many other areas with a tropical climate, the dry season is predestined for a holiday. The same goes for Zanzibar. That is why there are two travel times for the Tanzanian island in which you can count on ideal weather conditions. The best months to travel to Zanzibar are January, February, June, July, August, September and October. If you don’t want to be surprised by a sudden and heavy tropical rain during your holiday on the dream island, you should travel in these months.

The best travel time for Zanzibar at a glance:

Best travel time for a beach holiday in Zanzibar

In the mentioned dry seasons you can enjoy the best weather conditions on the island. Therefore, the months of January and February and June to October are the best travel times for a beach holiday in Zanzibar. The small dry season is popular with many European holidaymakers because they can escape the cold winter in January and February. The temperatures are hot at this time with up to 32 degrees Celsius and the Indian Ocean feels like a warm bathtub with around 29 degrees Celsius. With five to seven rainy days a month, you have a good chance that it won’t rain on your vacation. From March to May, during the big rainy season, things are different. It can rain heavily here for up to 17 days. However, as in many tropical areas, the rainy season does not mean that it rains continuously for days. Rather, the weather changes quickly, it rains heavily, but only for a short time. This is more common during the rainy season. If you don’t want to risk that and lie on a different dreamlike beach every day, you can do without the rainy season as a travel time for a beach holiday.

The second optimal travel time for a beach holiday on Zanzibar is the months of June to October. For many Germans, this time falls in the holiday season of their school-age children. The ideal weather allows for a wonderful beach holiday with the whole family. The average temperature is 30 degrees Celsius, the water is pleasant and, at 25 to 27 degrees Celsius, not as warm as in January and February. During the second high season you can expect five to seven rainy days a month. The humidity is high, but much lower than in the rainy seasons.

If you want to travel to Zanzibar outside of the best travel time, there are few hotels available on the coast, especially during the long rainy season. Many hotels use the rainy seasons for renovations and renewals and close the accommodations.

You can visit the picturesque capital of Zanzibar all year round. Clear blue skies and sunshine are essential for a beach stay. This does not apply to a discovery tour of Stone Town. Even if it’s cloudy, it’s beautiful here. If you visit the city in the rainy season, short and heavy showers don’t matter as much as on the beach. You can sit down at a café or restaurant during the rain and take a break. However, I do not necessarily recommend you to travel to Zanzibar during the rainy season to visit the capital. The high humidity makes things difficult for some holidaymakers and can be very exhausting. Therefore, I recommend the months of January and February as well as June to October as the best travel time for Stone Town.

My conclusion on the best travel time for Zanzibar

From the climate table and the explanations on the weather conditions, the best travel times for Zanzibar are the small and large dry season. During the small dry season in January and February you escape the cold and wet winter and during the long dry season from June to October you can enjoy a holiday with the whole family. The weather is perfect for exploring the island and enjoying the beach life. However, the dry season is the high season in Zanzibar. Flight and hotel prices are higher than during the rainy seasons. Due to the short but heavy rainfall and the high humidity during the long rainy season, I advise against this travel time for Zanzibar. Furthermore, not many hotels and accommodations are available as they close during the major rainy seasons. An alternative for a cheap Zanzibar holiday you can use the small rainy season. It rains less and not as heavily as during the big rainy season.