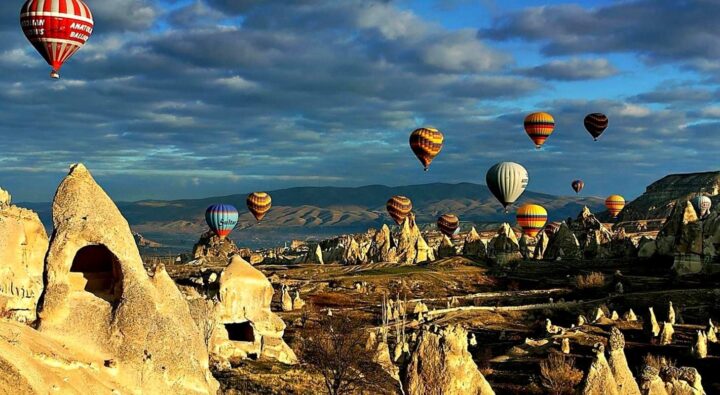 With its unique natural riches, Cappadocia is one of the must-see places in the world. / Cappadocia Hotels with Balloon Views

These lands, where fairy chimneys rise, have been among the important stops of the Silk Road, not only today, but throughout its history. The cultural wealth of the region, which has hosted many civilizations, is also quite impressive. Most of the cultural elements with local influences are still alive today. The prominent addresses of Cappadocia, which is a great center of attraction with its touristic value, are places such as Göreme, Avanos, Uçhisar, Ürgüp and Ihlara.

It is a different pleasure to watch this magnificent valley from above, which attracts attention with its landforms formed by the influence of nature. One of the most popular activities of Cappadocia is undoubtedly the Cappadocia balloon tours, which makes this possible. Giant colorful hot air balloons rising from Göreme offer this opportunity to guests who want to watch Cappadocia from the sky. Watching this glamorous show from the ground attracts as much attention as those who go on a balloon tour. For this reason, almost everyone who will have a holiday in Cappadocia starts their search with Cappadocia hotels with a balloon view.

If you prefer to watch the dance of hot air balloons in the sky while your feet are on the ground during your holiday, you should definitely review the hotels in our list. We are sure that you can find a hotel that fits your dreams and the holiday you are looking for in our list of Cappadocia hotels, some of which have balloon views from their balconies and some from their terraces.

Mithra Cave Hotel is one of the hotels where you can watch the hot air balloons, the symbol of Cappadocia. Providing service with a special status, the 39-room facility is located within a 2-minute walk of Göreme National Park. You can choose the most suitable one among the rooms with different features to stay in the facility, which has free wireless internet connection throughout the 2-storey building. It is possible to say that the cave rooms, which define the local concept of the rooms, are of interest to honeymooners. In addition, all rooms have air conditioning, television, tea / coffee maker, mini bar, safety deposit box as standard. Bottled water is provided free of charge. You can watch the balloons floating right above the hotel from your room or terrace, and have a great time in the general area and restaurants of the facility.

Emphasizing the view it has in its promotions, Sultan Cave Suites Hotel attracts great attention with its location in the national park. The establishment, which shows great interest from the guests who want to watch the balloon view, welcomes its guests in its 35-room facility. Sultan Cave Suites, which is among the most luxurious hotels in Göreme, offers its guests not only standard rooms, but also luxurious room options with different concepts such as Junior Suite, Suite, King Suite, Paşa and Sultan Suite.

The facility, which was built in accordance with the architectural structure of the region, offers a very pleasant atmosphere with its cave walls and room designs. In addition, with its restaurant that is assertive about taste, it appeals to the stomach after the soul of its guests.

Located a few minutes from Göreme National Park, Museum Hotel is one of the most romantic and enjoyable facilities in the region. Promising a wonderful holiday to its guests with its 2 bars and restaurants, an outdoor swimming pool, SPA room and meeting hall, the property has a special status. Mini bar, air conditioning, television, tea/coffee maker, hair dryer and amenities are available as standard in 30 accommodation units with different features.

There is a panoramic view of the valley from the terrace of the hotel, where honeymooners are also interested. The hotel, which stands out with its delightful garden, stylish restaurant and cave-concept rooms, serves in a bed and breakfast concept. 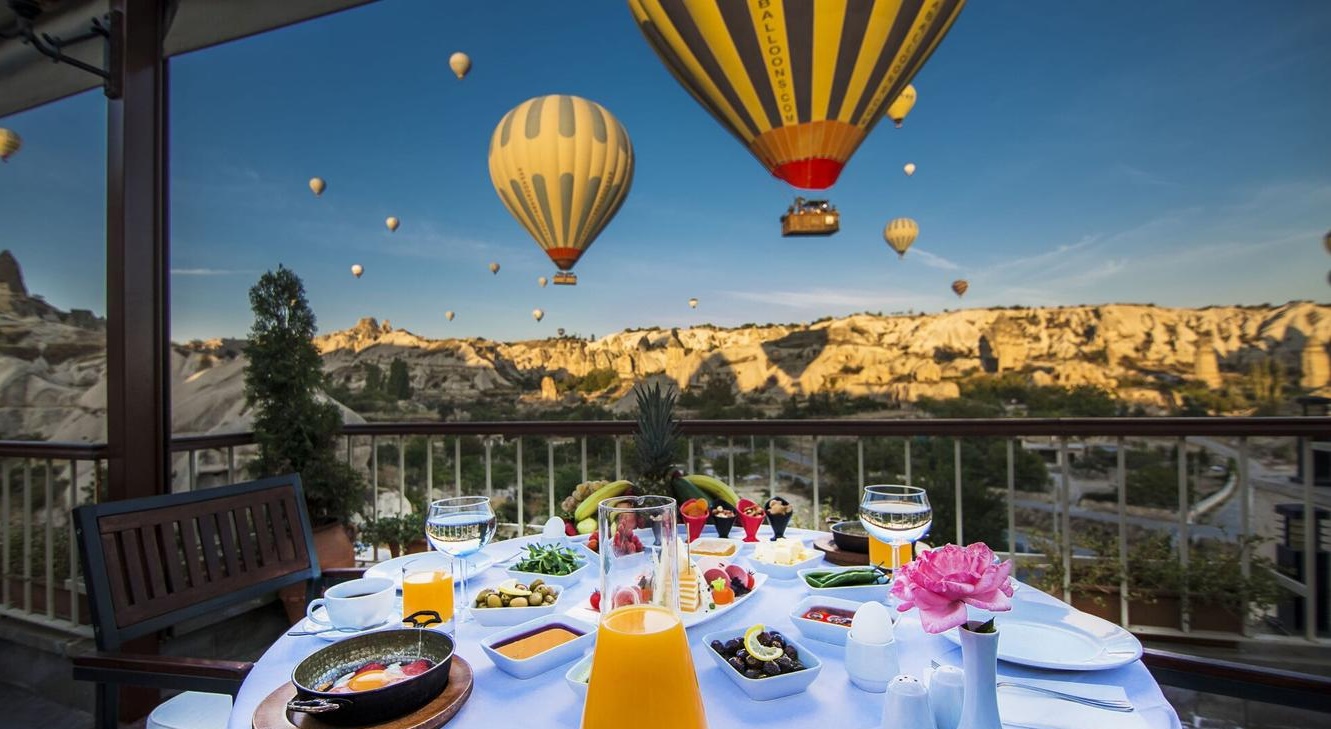 Located in Göreme, Kaya Hotel has a total of 55 guest rooms. The common areas such as the indoor swimming pool, SPA area, restaurant and terrace of the 4-star hotel serve for guests to have a pleasant time. Although the guests are generally very satisfied with the service, the common opinion is that the rooms need maintenance. The facility, which can meet your expectations with cave-concept rooms, SPA services, balloon view and central location, also has free wireless internet connection and parking lot.

Located in Göreme, the 4-star Doors of Cappadocia has been in service since 2012 in its building with 20 rooms and an outdoor swimming pool. In the hotel, where there are various common areas such as a restaurant and a bar, the rising balloons and the view of Goreme can be enjoyed from many points. You can watch the balloons floating above you while swimming in the outdoor pool or relaxing on the terrace.

Doors of Cappadocia, which is a facility that is compatible with the environment with its structure in accordance with the local architecture, offers options for everyone with its rooms with different features. Breakfast is served as an open buffet at the hotel, which serves bed and breakfast.

Goreme Valley Cave House, which has 10 different rooms, serves in the Göreme National Park region. The hotel, which can be considered as an ideal choice for both those who love boutique hotels and those who want to watch the balloon view, is also among the favorites of honeymooners. Favorite flavors of Turkish cuisine are prepared in the restaurant of the facility, which serves morning, lunch and dinner. Internet access is available wirelessly and free of charge. In the rooms, equipment such as air conditioning, mini bar, television, hair dryer, safety deposit box are available as standard. In addition, boucle materials are also provided. According to the request of the guests, there is also a transfer service to the airport.

Rox Cappadocia Hotel, located close to Uçhisar Castle, is on our list as one of the most suitable facilities for balloon sailing. The guests of this friendly and pleasant establishment with 8 rooms start the day with a delicious breakfast with its rich varieties. You can sip your tea while watching the balloon view in the early hours of the day and enjoy the moment and the view. Facilities such as air conditioning, television, tea/coffee maker and free bottled water and hair dryer are standard in the rooms.

Internet connection is provided free of charge throughout the establishment, which provides 24-hour room service. You can spend time in general areas such as the terrace, restaurant and bar within the facility, or you can benefit from the consultancy services provided at the hotel for various tours.

Located in the center of Avanos, Mira Cappadocia Hotel has 12 rooms. It is possible to watch the balloons in the breakfast restaurant of the property, which attracts attention with its recently renovated rooms and central location. Accommodation units for 2, 3 and 4 people have facilities such as air conditioning, television and hair dryer. The hotel, which has free wireless internet connection, is operated with the concept of bed and breakfast. 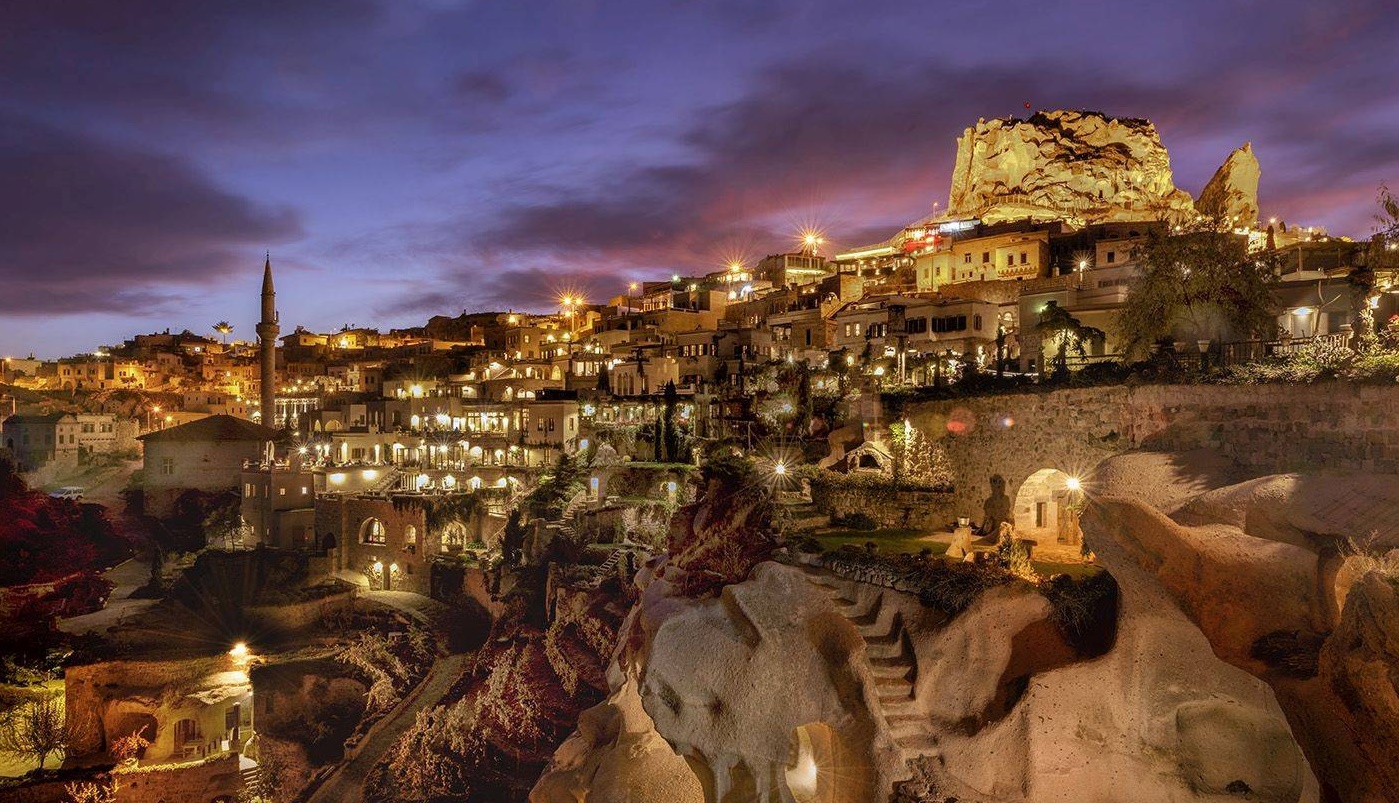 Argos in Cappadocia, which is within walking distance of Uçhisar Castle, has 51 rooms. The facility, which stands out with its winery, specially arranged garden, stylish rooms, swimming pool, location overlooking the balloon view, is also highly appreciated for its restaurant services. Accommodations are comfortable and quite spacious. All of them have air conditioning, television, mini bar, tea/coffee maker and hair dryer as standard. There is also a SPA center in the facility.

Offering a pleasant balloon view on its terrace, the hotel is among the recommended businesses of the region. The hotel, which stands out with its cleanliness and service quality, has 22 rooms. Wireless internet connection is provided free of charge in the hotel’s common areas such as the restaurant, swimming pool, terrace and accommodation units of the hotel, which is operated with a bed and breakfast concept. Breakfast service is offered as an open buffet, and the rooms of the hotel offer amenities such as air conditioning, mini bar, hair dryer as standard.