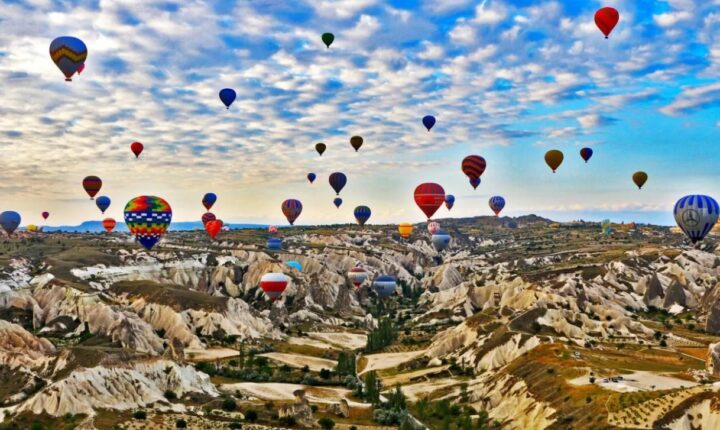 Located within the borders of Nevşehir province in Turkey’s Central Anatolia Region, Göreme is one of the places where you can feel the mystical atmosphere of Cappadocia the most. / Göreme Travel Guide

Located between Avanos Nevşehir and Ürgüp, Göreme is completely surrounded by valleys. Goreme, which is different in every period of the year, was turned into an Open-Air Museum in 1950 and was declared a World Historical Heritage Site by UNESCO in 1985 and was taken under protection. Today, Göreme Open-Air Museum is considered the largest open-air museum in Turkey.

Göreme, which is one of the pleasant travel routes with its historical texture and mystical atmosphere, is a town connected to the Merkez district of Nevşehir. Göreme, which has different geographical features, is among the important tourism regions of Turkey. If you ask which region Goreme, where you can travel all seasons of the year, is located in the Central Anatolia Region.

The formation of the region dates back to about 60 million years ago. The Cappadocia Region was formed by the erosion of the layer formed by the lava sprayed by Güllü Mountain, Erciyes Mountain and Hasan Mountain by rain and wind. The rocks in the region, which have extraordinary shapes, were carved and used for shelter.

Today, some hotels provide accommodation services in these cliffs. Goreme, which has a long history, has hosted different civilizations. There are Christian cemeteries and churches in the area. With its central location in the Archdiocese of Göreme in the 13th century, it has a great importance in Christianity.

Due to this feature of Göreme, there are important religious buildings in the surrounding area. Göreme, which was an important settlement during the Seljuk and Ottoman periods, maintains its importance throughout history. Göreme, home to some of the Fairy Chimneys, is a small town. Göreme, with a surface area of ​​6871 hectares, is a Nevşehir town that stands out with its historical heritage. You can discover the traces of different cultures in Göreme, which has a rich historical past.

In Göreme, where the tourism potential is developing, workshops where soil testing and pottery are produced are quite common.

You can see the pitchers and pottery workshops in the streets of Göreme. The fame of soil jugs and pottery also shows its effect in Nevşehir cuisine. Many local flavors are cooked for earthenware jugs. It has a central location in terms of the Göreme map. Ürgüp and Avanos districts are located around Göreme, which is located in Nevşehir Central district.

Cappadocia Goreme, whose fame has spread to the world by surpassing Turkey, welcomes thousands of local and foreign tourists every year. Staying in Goreme’s hotel rooms carved into the rocks is a different experience for everyone. From the past to the present, people living in the region have lived in these rooms carved into the rocks. Today, old houses have been converted into hotels or newly built hotels have been built in accordance with the texture of the region.

The decoration of Goreme boutique hotels, which are not very high-rise and all of their rooms are carved into the rocks, are made in accordance with the mystical atmosphere of Göreme. Goreme hotels are cute boutique hotels with about 8-10 rooms. While these natural beauties, which have been carried from the past to the present, offer you a romantic holiday, the magnificent view of the nature made up of volcanic tuff will fascinate you. The prices of Goreme hotels, which host their guests in all seasons, also differ from season to season. However, Göreme hotels appeal to every budget with this year’s updated price options. It can be a different experience to stay in Goreme hotels carved into the rocks, especially in Goreme, which takes on a different atmosphere in autumn. 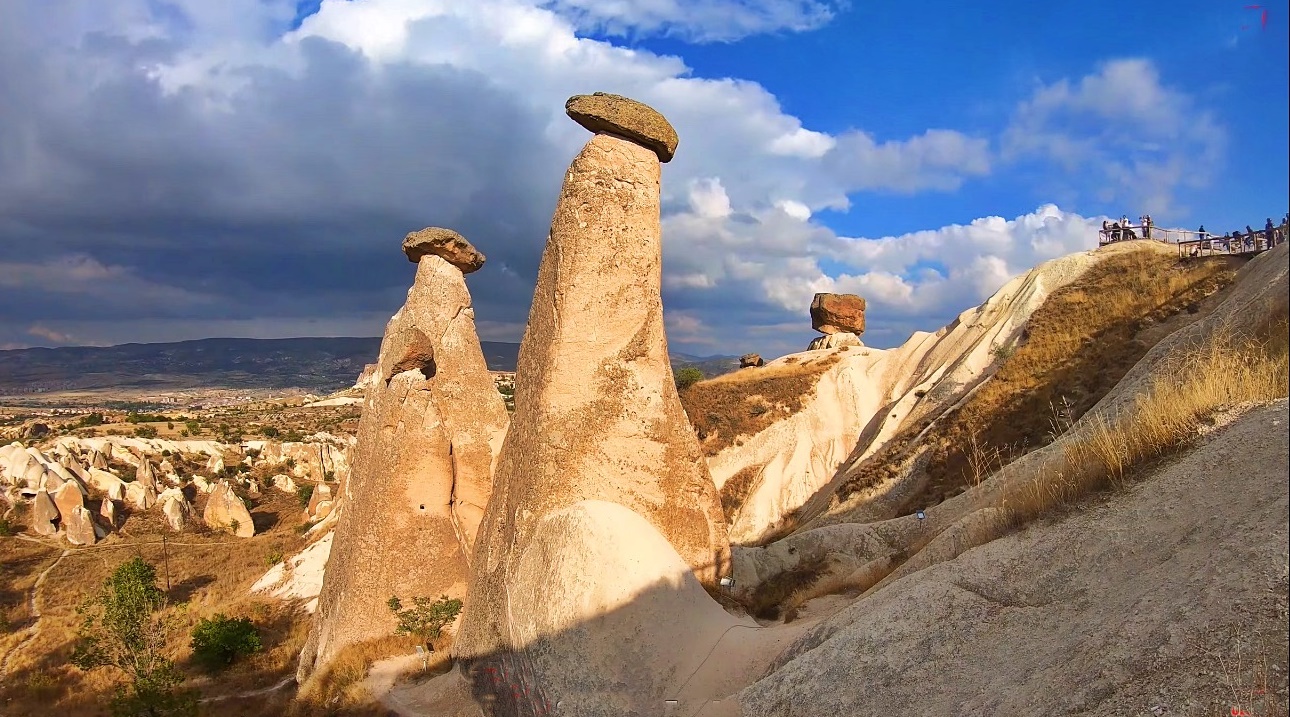 When you come to Göreme, Göreme Open Air Museum is at the top of the places to go. Everywhere in the Cappadocia Region is like an open-air museum.

Göreme Open Air Museum was turned into a museum in 1950 and opened to visitors, and in 1985 it was included in the World Heritage List by UNESCO. It is the largest open-air museum in our country. You can see the magnificent fairy chimneys, rock tombs, monasteries, churches and almost all the features of the region in the museum, which the volcanic land offers us. In the National Park, walking lines have been determined so that both natural and cultural values ​​can be visited with a different approach.

You can also see Byzantine churches in the museum, which is approximately two kilometers from the center of Göreme. Some of these churches are Dark Church, Elmalı Church, İsketeli Chapel, Çarıklı Church, St. Basel’s Chapel and Tokalı Church.

You can go to Pigeon Valley. This is one of the most beautiful places we recommend you to visit in Göreme. Do not return from Cappadocia without making exploratory walks in the four thousand meter long valley. Other valleys you can visit in Göreme are Zemi Valley, Göreme Kızılçukur Valley, Göreme Bağlıdere Love Valley and Güllüdere Valley.

Cappadocia Çavuşin Church in Çavuşin near Göreme and Cappadocia Paşabağ Priests Valley on the Avanos road are worth seeing. You can go here.

You can go to Ürgüp, which is seven kilometers from Göreme. You can visit the old Greek houses, old stone buildings and cave houses.

Around Goreme, you can see the Ihlara Valley, which is also a fascinating place. Finding the path of the Melendiz Stream among the many different shapes formed by the cooling of the lava coming out of Hasan Mountain has created a completely different beauty in the town. The tombs you will see in the valley and the structures carved into the rocks are another fascinating one.
You can go to Avanos, famous for its dishes. You can try making the dish and take lots of pictures. You can taste the famous grape wines of the region.

What to do in Goreme?

You can have a nice exploration walk in the center of Goreme and take lots of photos on the streets.

You can go to towns such as Ortahisar and Uçhisar around Göreme and see the natural wonders there.

By going to Avanos, you can both visit the region and watch the pottery making. If you want, you can try and buy the dish making. You can taste and buy homemade grape wines.

You can go to Ürgüp and Ihlara Valley. You can witness the most magnificent beauties that nature has to offer, take exploratory walks and take lots of photos.

The 25 most beautiful cities in Turkey

You can visit Goreme Open Air Museum. You can see rock tombs, cave churches, monasteries and many other historical ruins from the Byzantine Period.

You can spend time in the center of Goreme, you can shop in the bazaar.

One of the most fun things to do when you come to Goreme is a balloon tour. It is a different pleasure to watch Goreme from the heights, especially in the morning with the first rays of the sun.

In addition to the balloon tour, you can also take a horse tour in Goreme. Walking around the streets of Göreme on horseback and watching fairy chimneys like this will be an unforgettable experience. If you want, you can visit the region by participating in activities such as ATVs or jeep safari. You can plan a bike tour.

You can have a nice dinner at the restaurants in the center of Göreme, have a coffee in a nice cafe during the day, and do some nice shopping for your loved ones and home.

Where to Eat in Göreme / Göreme Travel Guide

You can find almost every taste in Göreme, which hosts many local and foreign tourists around the world. You can find fast food restaurants, grilled meat and chicken products, pita, kebab and lahmacun restaurants in Göreme, where you can taste the flavors of Turkish and World cuisine.

However, when you come to Göreme, we say that you should not return without tasting the local delicacies. The regional cuisine of Göreme shows similar characteristics with the cuisine of Nevşehir and Central Anatolia Regions. Soups, meat and tandoori dishes and pastries are in the foreground. Some of the local delicacies are as follows: Ağpakla, divıl, stuffed quince, Nevşehir pan, bowl, dalaz, bulama, sızgıt, acid, osbar kebab, tandoori soup, tarhana soup, apricots, puckered baklava, meatballs. You should definitely try Nevşehir pan and shrink baklava.

If you want, you can find cafes or tea gardens where you can eat snacks such as toast and pancakes during the day.
Topdeck Cave Restaurant: Hidden among the narrow streets of Göreme, it is a very famous restaurant among the local people for its delicious appetizers.

Old Greek Restaurant&Hotel: Also known as Asmalı Konak. Serving at the tables set in its courtyard, the restaurant offers examples of Turkish and Ottoman cuisine. Stuffed leaves and homemade baklava are among the must-try places. This mansion, which has never been restored, still preserves the old Greek house atmosphere.

What to buy in Göreme?

You can find jewelry, ornaments, souvenirs, textile products, clothes for your loved ones and yourself in many stores and shops in the center of Goreme.
Apart from that, you can buy bowls from Avanos. You can buy homemade grape wines for your loved ones and yourself. You can find handmade embroidered covers, textile products, handmade small carpets and rugs or handmade jewelry.

How to go to Göreme / Göreme Tips

If you want to reach the region by bus, today there are bus services from many cities in Turkey to the Cappadocia Region. After arriving in Cappadocia by bus, you can reach Goreme by minibus or minibus.

If you are going to go to Göreme with your own vehicle, you can use the Ankara-Adana highway from the west and south, the highway from Niğde or Aksaray to Nevşehir, and the highway from Kayseri to Avanos or Ürgüp from the east and northeast. Here are some road information:

The distance between Kayseri and Göreme is approximately 71 kilometers and takes 1 hour.

The distance between Ankara and Göreme is approximately 305 kilometers and takes 4 hours.

The distance between Adana and Göreme is approximately 275 kilometers and takes 3 and a half hours.

The distance between Istanbul and Göreme is approximately 755 kilometers and takes 9 hours.

The distance between İzmir and Göreme is approximately 775 kilometers and takes 11 hours and 20 minutes.

The town, which draws attention with the tourism activities of the Central Anatolia Region, reflects the climate of the region. In Goreme weather, summers are hot and dry, while winters are cold and rainy.

In Göreme, which has the characteristics of a continental climate, the majority of the days when the air temperature drops below zero during the winter months. Summer months in Göreme are hot and dry. Spring months may be a suitable choice for you to visit the region. You can visit Goreme comfortably without being disturbed by the heat or the cold. Tourism activities in Göreme serve all four seasons, and you can plan a trip to the region in a season that suits your taste and preference.

Göreme has steppe lands due to weather and climate conditions. There is very little forest area in Göreme, and herbaceous and thorny plants make up the surrounding vegetation. While the lands of Göreme are green in spring, they leave their place to a yellow appearance in summer.

Matiate Turkey: Archaeologists discover what is believed to be the largest underground city in the world