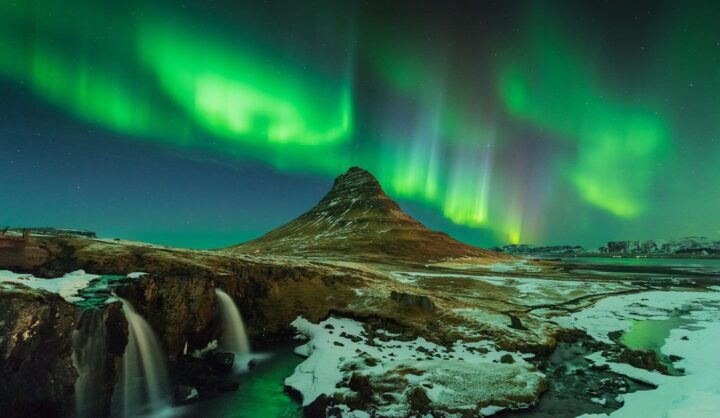 The 10 best places to see the Northern Lights

Who doesn’t know them, the beautiful green glittering Northern Lights? But who of you has actually seen them before? The natural spectacle has different names: Northern Lights, Northern Lights or Aurora Borealis. Did you know that they can be found not only in green but also in yellow, blue and even red? They can be found in polar regions from September to March. The best travel times are September, October, February and March, since statistically the bright polar lights are most common during this time. So get warm and start looking. Here I introduce you to the ten best places to see the Northern Lights.

O Iceland. Even if the beautiful island in the north is no longer an insider tip, it magically attracts nature lovers in particular. Statistically, one of the most common places to see the Northern Lights is in North Iceland.

The wild island beauty of Iceland is not only one of the best places to see the Northern Lights, but also worth a visit to the hot springs or numerous waterfalls. Did you know that Iceland even has an official Fairy Commissioner? Off to Iceland, a truly magical place.

In addition to winter sports, America’s icy north Alaska also invites you to observe the “Northern Lights”, as they are called here. The largest city in Alaska, Anchorage, is the starting point for Northern Lights tours.

Many day trips and also multi-day trips start from there. The Eagle River Nature Center outside of Anchorage is considered one of the best places in the world to see the Northern Lights.

3. Canada – The perfect proximity to the North Pole

A trip to Alaska can be wonderfully combined with a trip to Canada. Due to its perfect proximity to the North Pole, Canada is described as an almost perfect starting point to go in search of the Northern Lights.

National parks such as Jasper National Park and Wood Buffalo National Park are particularly recommended. The special feature of these parks is that they are so-called light protection areas.

There are almost no artificial light sources there, which increases the chance of catching a glimpse of the beautiful colorful lights.

Not only Michel, Pipi, the children from Bullerbü and Karlsson from the roof were allowed to spend their childhood under the lights, but also the writer Astrid Lindgren. In Sweden, Astrid Lindgren’s homeland, there are several places to go for a trip to see the Northern Lights.

You can admire the “Norrsken”, as the Swedes call the northern lights, best at the extreme civilization edge of Sweden in Kiruna or Lulea.

If you are looking for adventure, you should grab a dog sled or a snowmobile and drive even further north, because there, in deepest Lapland, the northern lights can best be admired without disturbing influences over a moose sausage by the campfire.

5. Tromso, Norway – The Gateway to the Arctic

Norway is also a great place to watch the Northern Lights. Between picturesque fjords and steep snowy mountains, the gateway to the Arctic Tromso invites you.

From the enchanting city you can quickly be in nature and go there to hunt for the northern lights. You can also meet moose and spot seals just a few kilometers from Tromso.

6. Svalbard – The islands between Norway and the North Pole

Svalbard is an archipelago in northern Norway that is home to more polar bears than people. In the winter months, snowmobiles or dog sleds are the main means of moving across the endless wild snowy landscapes.

The best way to travel is by plane to Longyearbyen, the “northernmost airport in the world”. From there you embark on a unique adventure in the arctic wilderness of Spitsbergen, the islands between Norway and the North Pole.

Finland is also one of the countries where you can observe the northern lights particularly well. The region of Lapland in the north is particularly good for this.

So how about a visit to Rovaniemi? Santa Claus Village is located in the capital of Lapland. There you can see where all the wish lists go, how the Christmas elves work and marvel at the northern lights together with Santa Claus.

Glass igloos where you can sleep under the stars are also very popular in Finland. This clearly makes Finland one of the best places to see the Northern Lights.

8. Isle of Skye, Scotland – Aurora Borealis on the Isle of Mist

Did you know that the Isle of Skye is at the same elevation as Alaska? No? Then you will be just as surprised that you have the opportunity to see the Northern Lights in Scotland.

The further north you go, the greater the chance of being able to watch the “Mirrie Dancers”, as the Scots call the aurora, going about their business. The Isle of Skye is one of the best places to see the Northern Lights, not just in Scotland!

What would go better with the green island of Ireland, with its leprechauns and bright green meadows, than the (often) green light show of the Northern Lights?

How fortunate that exactly this can also be seen there! If you hike the Wild Atlantic Coast Way northwards, you can have the opportunity to see the Northern Lights around the height of Donegal.

Ireland isn’t at the top of the list though, as the Emerald Isle isn’t as far north as our other destinations. Despite this, the ease and cheapness of getting here makes Ireland one of the best places to see the Northern Lights.

10. Germany – The surprise at the end

If Scotland and Ireland are still too far away for you, you can even be lucky and admire the beautiful northern lights in Germany. There are up to 20 reports of aurora sightings in Germany every year.

Aurora was last seen from Berlin in 2014. That’s because the sun was at the peak of its activity cycle, meaning the auroras can be particularly strong.

This usually takes place every eleven years. In 2025, the chances are again particularly good that Germany will also be one of the best places to see the northern lights.

How are the Northern Lights formed?

Aurorae occur when electrically charged particles emitted by the sun collide with gas particles in the air. The phenomenon of these tiny particles that the sun ejects into space is called the solar wind.

As soon as these particles hit the earth’s surface, they react with the oxygen and nitrogen atoms and the auroras are formed. However, this spectacle can only be seen when the sky is completely dark and clear.

Why are the aurora borealis different colors?

The color of an aurora depends on the different components of the atmosphere and the altitude. In total, the northern lights can take on six different colors. The most common colors are red, green and blue.

However, this can result in mixed colors such as white, purple and, rarely, yellow. Green auroras usually form at an altitude of 80 to 150 km in connection with oxygen. Red and blue lights come about between 150 and 600 km and mostly from a connection with nitrogen atoms.

When is the best time to travel to see the Northern Lights?

September, October, February or March are considered the best months to see the Northern Lights. During this period it is possible to see bright auroras as well, not just the “normal” ones. Aurora travelers can also observe the northern lights in the months from November to January.

Are there other places where the Northern Lights can be seen?

Auroras can also be observed from the following places and areas: Greenland, northern Siberia, Svalbard, northern Scotland and other northern parts of Scandinavia.

The 10 best ski resorts in Italy
From Oslo to Trondheim: 10 things to do in Norway when it rains
Pyramiden – Norway: The northernmost ghost town in the world