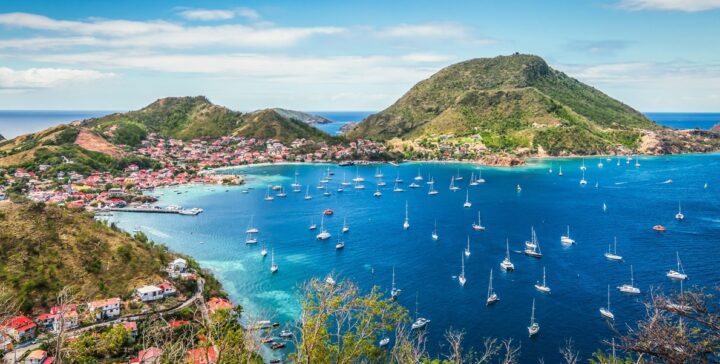 The best travel tips for Guadeloupe

Many Germans mainly associate a Caribbean holiday with travel destinations such as Cuba, the Dominican Republic or the Bahamas. But there are numerous other island paradises in the Caribbean. Guadeloupe for example.

7000 kilometers from Europe lies an island that comes pretty close to the concept of paradise. And this despite the fact that it belongs to France and is therefore officially part of the European Union. However, European weather rarely prevails on the Caribbean island of Guadeloupe, which belongs to the Lesser Antilles. Instead: subtropical temperatures of almost 20 to 30 degrees Celsius.

The small paradise has an area of ​​about 1600 square kilometers and is inhabited by little more than 400,000 people.

Two islands and an inlet

You can’t really call Guadeloupe “the island” because it consists of eight inhabited and some uninhabited islands. The two largest, Basse-Terre and Grande-Terre, are separated from each other by a sea arm only about 50 meters wide.

But the islands are so different, it seems like there are worlds between them: while Grande-Terre in the west conveys the typical Caribbean feeling with white dream beaches, charming mills and sugar cane plantations, Basse-Terre is the island of wild, lush nature. Here lies the 1467 meter high volcano La Soufriere, the highest mountain in the Lesser Antilles, here there is a national park with waterfalls and warm springs.

Once again, Christopher Columbus is “to blame” for the discovery of Guadeloupe. He landed on the island with his fleet on November 3, 1493 and gave it the name that is still valid today – he borrowed it from the Spanish pilgrimage site Nuestra Señora de Guadalupe. The first French, mostly farmers, were settled on the archipelago from 1635. Since then, Guadeloupe has been French with brief interruptions.

The new residents began cultivating sugar cane and coffee, using slaves from Africa as labour. There were also wars on Guadeloupe, and even the French Revolution of 1789 was felt. But this is another story.

Guadeloupe has been part of France since 1946

overseas departments and is no longer considered a colony. Which means that the inhabitants of the Caribbean island are French. Of course, this has advantages, since France supports Guadeloupe financially, but it also harbors problems – unemployment is comparatively high.

Islands with white beaches and mountains

It is obvious that the French make up the majority of the tourists. But not only they are fascinated by the charms of Guadeloupe. Other Europeans also enjoy the fact that you can pay with the euro here. And they love the tropical paradise: Countless paths lead to dreamlike small beaches – white beach on Grande-Terre, black one at the west end of Basse-Terre -, others in the national park in the mountains on Basse-Terre.

You can hike along mangroves to the Cascade aux Ecrevisses waterfall, to the impressive Carbet waterfalls, to the Grand Etang lake or up to the Soufrière volcano. Nature fans will be happy about huge rubber trees, countless species of orchids, flame trees, mangoes or papayas, about freshwater seals, parrots, hummingbirds and raccoons – and about the fact that there are no dangerous animals on Guadeloupe.

Guadeloupe is a paradise for sailors, surfers, golfers or canyoners, but even visitors interested in culture will find what they are looking for. In the town of Pointe-à-Pitre, for example, there are many charming colonial houses and the charming Place de Victoire, and there is a museum commemorating the slave emancipation.

Incidentally, Guadeloupe is also a Mecca for carnival enthusiasts: they parade through the streets of the cities at carnival time – colorfully dressed and accompanied by plenty of music. Sitting still is absolutely impossible these days. So you dance along, and later you stop off in one of the restaurants with French and Caribbean specialties.