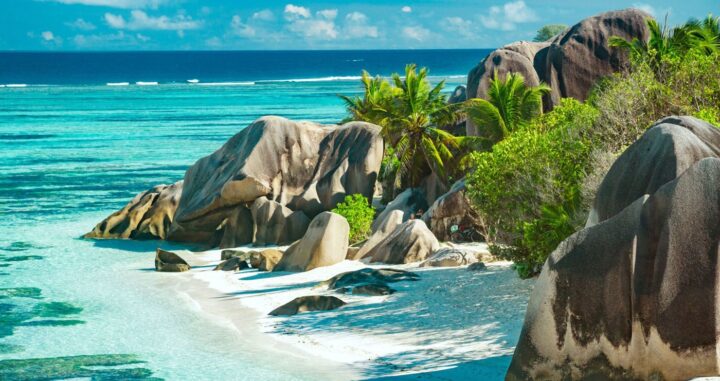 Seychelles, which is geographically connected to the African continent, is an archipelago country consisting of 115 islands, including 42 granite and 73 coral./ Where is Seychelles?

The Republic is divided into 25 regions, all located in the Inner Islands. The Seychelles are distributed between the 4th and 10th latitudes south of the equator and are located in the Western Indian Ocean, 480 to 1,600 km from the east coast of Africa. Therefore, they are topographically part of the African continent. They lie on the northern and western parts of the Mascarene Ridge, a submarine sill.

To the south of Seychelles are the island states of Madagascar, Mauritius and Comoros. The country covers a land area of ​​455 km², the largest of which is the uninhabited Aldabra Atoll, and the total sea area is 390,000 km²

Picturesque beaches and ecological diversity, ranging from dense tropical forests to the deep blue ocean, make this archipelago world famous. The entire area belongs to the UTC+4 time zone; This means a time difference of three hours in the winter half-year and a time difference of two hours compared to European summer time.

Seychelles is home to two UNESCO World Heritage Sites: the famous Vallée de Mai in Praslin is home to the rare Coco-de-Mer nut.

Madakasgar is located in the southern part of Seychelles, which is about 800 kilometers off the east coast of Kenya. Seychelles, which is only 7 degrees south of the equator, has some characteristics unique to these regions due to its proximity to the equator. Every day the sun sets around 18:00 and rises again at 6:00 in the morning. Throughout the year, these times do not change for more than half an hour.

Also, there is no obvious seasonal variation in Seychelles. Its proximity to the equator means that Seychelles has an average summer temperature of 29 degrees Celsius all year round.
It rains more frequently in December and January than in other months of the year.

The four largest islands in this archipelago are Mahe, Praslin, Silhouette and La Digue. The capital of Seychelles is Victoria on the island of Mahe.

The largest island, the main island of Mahé, is also the most densely populated island in the country. It covers about 154 of the 266 square kilometers of the Inland Islands. The highest altitude, Morne Seychellois (905 m), is also located in this region.

The outer group of islands, mostly coral islands, is too low to inhabit and has no source of drinking water. There are only a few settlements in the area.

Seychelles is also one of 218 EBA (Endemic Bird Areas) in the world – 15 endemic species and 18 subspecies evolved here.

Birds found only here include the Seychelles Vasa Parrot and the White-Throated Ray, the Indian Ocean’s last flightless bird. Seychelles hazelnut, a palm species found only in Praslin and Curieuse in the world, is also endemic. ‘Maital’, Vallée de Mai, is a UNESCO World Heritage Site and managed by the Seychelles Island Foundation, which aims to ensure the conservation of biodiversity.

Seychelles was probably first discovered by Arab traders. Colonization took place around 1750 by the French. After a series of bloody wars, Seychelles came under the rule of the British Empire at the beginning of the 19th century. The country gained its independence in 1976.

The present population of the islands consists largely of descendants of French settlers and their former African slaves. There are also European, Chinese and Indian minorities in the country.

Today, about 30 percent of the population works in the tourism industry and it accounts for about 70 percent of the national income. In 2012, Seychelles had the second highest per capita income of all African countries. Also, Seychelles is the first country in the world to include nature protection in its constitution.