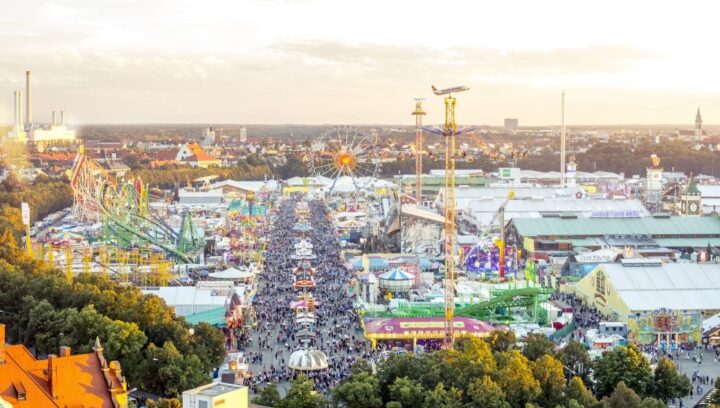 If there is something in autumn that can counteract the gloomy weather, then it is the Munich Oktoberfest. / Oktoberfest questions

Between September 17th and October 3rd, 2022, after a two-year break due to Corona, millions of people from all over the world will set off for the Theresienwiese again. Those who visit the Oktoberfest for the first time ask themselves a few questions.

The crowds are pouring, and so is the beer: Oktoberfest. People travel to Munich from all over the world to experience the largest folk festival in the world. Millions of visitors are expected again. The most important questions and answers for Oktoberfest beginners.

Oktoberfest questions: 1. Why is it actually called “Wiesn”?

It’s not about several and certainly not about green meadows. But one thing: the Theresienwiese. You can only see lush grass at the edges – the 34.5-hectare festival area is gravel and criss-crossed by tar roads. They have been given names: Wirtsbudenstraße, Schaustellerstraße and Matthias-Pschorr-Straße – other streets are simply numbered, such as Straße 3 Ost. Flowers only grow in large concrete tubs that stand in the access roads around the folk festival – as a bulwark against possible terrorist attacks. Throughout the year, the Theresienwiese is a leisure area for residents, dog owners and joggers.

2. How did the folk festival come about?

Originally it really was an Oktoberfest: the whole of Munich celebrated for five days from October 12, 1810, when Crown Prince Ludwig – who later became King Ludwig I – married Princess Therese of Sachsen-Hildburghausen. The festival was repeated in the following years. The first carousel and two swings were set up in 1818, and around 1880 more rides and show booths were added. However, it can be cold in October: bad weather – bad business. In 1872, the festival was celebrated earlier for the first time, and in 1904 the magistrate officially decided to bring it forward. Appropriate proposals had already been made in 1829, but they were rejected out of consideration for the surrounding farmers – they should bring in their harvest before visitors trampled it down.

3. Why does the Lord Mayor have to tap the first keg?

This is a story more than 60 years old. It began with Lord Mayor Thomas Wimmer in 1950. It is said that he was driving in the car of the Schottenhamel family of innkeepers – and the innkeeper had it tapped into spontaneously. There is another version, according to which the tapping was very well planned, after all Wimmer was setting a sign for closeness to the people and a new beginning.

Since then, the opening of the festival has been the privilege of the mayor. The number of shots is definitely relevant for his reputation – a special Munich standard for potency and ability. Wimmer needed 19 shots the first time, Christian Ude perfected the tapping and was the first OB to do it with just two shots. For this he practiced with his trainer, the brewer Helmut Huber.

4. What is the Wiesn beer all about?

First of all, a widespread misconception has to be cleared up at this point, because the correct word is: the Maß. That in itself is difficult for the stranger, because it is neither the measure nor the measure, but the measure. With a short A. It contains at least 0.9 liters, even when poorly poured. That’s a lot, because Oktoberfest beer has between 5.8 and 6.4 percent alcohol, normal beer only around 5 percent. The beer is brewed by six breweries especially for the Wiesn. Incidentally, at the first Oktoberfest the beer cost three Kreuzer and three Pfennig. In 2022, the price for the Maß will be between 12.60 and 13.70 euros. In a happy and humid mood, some people notice the effect too late. Several hundred visitors therefore have to be treated at the medical station every year.

It is best to come to one of the marquees during the day during the week. There’s always something going on. Otherwise: let yourself be invited! Because even months in advance, it is practically hopeless to reserve one of the coveted tables. The regular guests usually have priority with the innkeepers – and that means that the reservations are already exhausted. There are complex rules according to which parts of the tent must always be left unreserved.

Some guests slip the waiter a few bills so that she clears seats. If the landlord catches her, she’ll be kicked out – and possibly the guests too. Once you’re in the tent, you shouldn’t leave it lightly and leave your clothes behind to reserve a spot. Because the tents are regularly closed due to overcrowding. Anyone who is outside then can no longer come in. It doesn’t help if you say that the clothes are still in there. After all, anyone can say that.

6. How do Wiesn visitors dress?

Since the Munich are relaxed. For them, live and let live. Anyone who thinks they are actually wearing a dirndl or lederhosen that are available around the Wiesn is wrong. Real leather trousers should be made of deerskin. With the traditional accessories from the chamois beard to the charivari – a kind of belly jewelry made of silver for the gentleman – four-digit amounts are gone. For a real traditional dirndl too.

Cheap clothes easily identify the wearer as a newcomer. The popular checked shirt, for example, goes well with mountaineering or chopping wood, but not with leather pants. A white linen shirt goes with it. Frowned upon by the locals: dirndls that are too short, i.e. anything that ends above the knee. No go: woman in leather trousers. T-shirts with “performance drinkers” don’t necessarily have to be. Here you will find more information for dirndl wearers.

Incidentally, it can be up to ten degrees warmer at the Wiesn than elsewhere in the city; the humidity is a third higher, as the Bonn meteorologist Karsten Brandt found out during measurements. Two-thirds of the crowd – sometimes there are 350,000 guests a day – heat up the climate itself. Because a person generates 80 watts – as much “as a big old light bulb,” says Brandt. Lights, fairground rides, chicken roasteries and kitchens do the rest.

8. How do you recognize the relationship status from the Dirndl?

If a woman wears the bow of her apron on the left, she is free – so you can try it. If the bow of the apron is tied on the right, this means: married or at least in safe hands. Center loop: Virgo. Bow at the back: Widowed, waitress – or not a local, that’s how you tie the common kitchen apron.

Caution: Because so many women have just bought the dirndl at the booth on the way to the Oktoberfest without any instructions for use, the loop rules get mixed up – and thus cause exactly the mischief and confusion that they were originally intended to prevent.

9. Why do many Wiesn visitors get sick?

It usually starts a few days after the start: running noses, weak limbs. The Oktoberfest is a big virus exchange. The exciters are easily exchanged in the confinement. In addition, alcohol weakens the immune system; the warm, humid atmosphere is a good environment for viruses. The connection has not been scientifically proven. However, it is reported that according to nationwide reports from selected medical practices, the autumnal cough in the Munich area begins a little earlier than in the rest of Germany.

10. Is the Oktoberfest suitable for children?

Carousels, ghost train, cotton candy – a dream for every child. If you think so. But the noise, the many people and the long distances are too much for some little guests. A day at Oktoberfest is exhausting and sometimes ends in chaos – when children get lost in the crowd. In the morning, however, the folk festival can certainly be suitable for children. There are discounts for families and the “Familien-Platzl” as a quieter place.

Every year around 4,000 items are stacked up to the ceiling on the shelves of the Oktoberfest Lost and Found office, including glasses, smartphones and keys. Wheelchairs and dentures are also regularly forgotten, although the number of the latter seems to be decreasing – possibly because of the implant skills of the dentists.