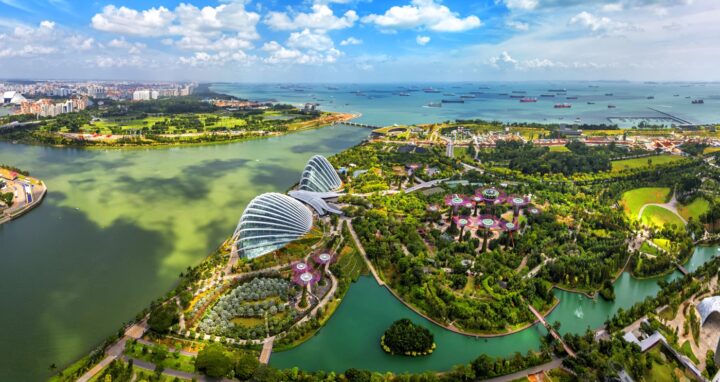 Best travel time Singapore. A holiday in the Lion City is at its best at this time / Best Time To Visit Singapore

The months from March to September are the best time to travel to Singapore. Read on to find out what the temperatures are at this time and when to watch out for monsoons. The clear climate table gives you a rough overview of the weather and climate in Singapore.

Weather and climate in Singapore

Singapore lies between Malaysia and Indonesia, just one degree from the equator. This puts the city-state in the tropical climate zone. This means for the weather and climate in Singapore: Hot summers and warm winters with comparatively much rain. The temperatures hardly change from month to month, which is why you can always count on constant warmth between 25 and 33°C.

However, the permanently increased humidity in Singapore sometimes makes it difficult for Europeans to cope. Since Singapore is part of the tropical belt, the Lion City occasionally gets a good dose of rain from the sky. Although there is no typical rainy season in Singapore, as in many other Asian countries, a few more raindrops fall from the sky here and there.

However, the rain showers usually only last for one to two hours, so you still have wonderful weather for the rest of the time. The driest period is from March to May. So if you don’t want to have wet feet, you can move your Singapore trip to this period. By the way, the best time to travel to Singapore for a beach holiday is all year round.

The monsoons, which are typical of many parts of Asia, have an enormous impact on the climate in Singapore. There is a so-called north-east monsoon in the island state, which brings thick rain clouds and heavy showers into the country in December and January. But as I said, these usually come down once in the afternoon and then it’s fine again.

In March, the north-east monsoon is then replaced by the south-west monsoon, which, like its accomplice, brings rainy weather and gusty winds. For the rest of the year it is unusually windless and therefore great for a beach holiday in Singapore. If you travel during the rainier months then you have a good chance of snagging cheap Singapore holidays. So put on your raincoat and let’s go!

Arrived in the exotic city-state, there are a few sights in Singapore that a visit to is almost obligatory.

On the one hand there is the Merlion. The statue is a mixture of mermaid and lion (Mermaid + Lion = Merlion) and is the namesake of the Lion City.

Singapore’s Orchard Road is the number 1 destination for all shopaholics. The 2.2 kilometer long shopping street is home to every imaginable fashion brand, specialist shop and other crazy lifestyle shops.

Sentosa Island is the Lion City’s own little island of fun. Gardens and amusement parks abound on the Singaporean island. on the south side of the island there is a 3 km long, snow-white sandy beach

And last but not least, I would like to recommend Singapore Zoo to you. Now you’re wondering what’s supposed to be so special about this zoo? Well, it’s the largest open-air zoo in the world. Instead of bars and fences, there are only natural borders here, such as rivers, rocks, ditches. At night, the night zoo opens for an exciting night safari.

Kampong Lorong Buangkok: The Last Village of Singapore
These are the worst airports in the world
10 inspirational travel films