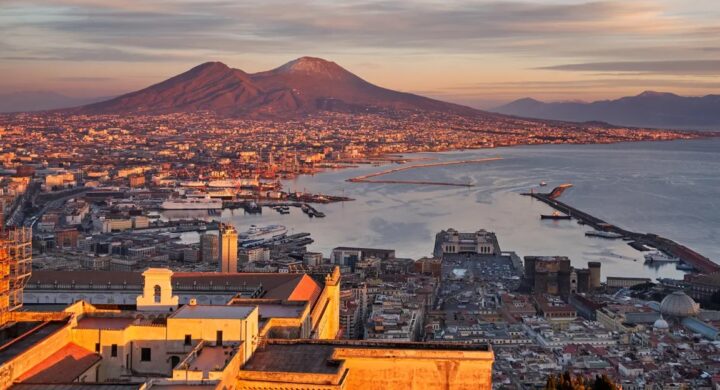 When you hear Italy, many people think of gelato, pizza and pasta first, right? You will realize that Bella Italia is not just about food when you see the beautiful landscape, lakes and beaches. Few will be aware that there are also numerous volcanoes in Italy. In my article about the volcanoes in Italy I tell you everything about the natural phenomenon.

Vesuvius is by far the most famous volcano in Italy, closely followed by Etna in Sicily. Located in the Gulf of Naples, it majestically shapes the cityscape of Naples. The next largest city, Naples, is just 9 kilometers from the volcano. It makes you feel a little queasy.

Vesuvius got its popularity from its eruption in 79 AD. and the associated fall of the city of Pompeii. The last eruption happened in 1944. Since then there have only been minor earthquakes of no concern. Long periods of rest are very typical of Vesuvius, which is why experts are warning of another eruption.

You can also see Vesuvius up close and walk to the crater. However, I advise you not to wear white shoes because after your hike they will not be white anymore.

On the beautiful island of Sicily you will meet Mount Etna with its 4 summit craters. It reaches a remarkable height of 3,350 meters and is almost 2,000 meters higher than Vesuvius. Another striking difference to Vesuvius lies in its activity. After Kilauea in Hawaii, Etna is one of the most active volcanoes in the world.

It only recently, in early June 2019, erupted for the last time and will continue to spit fire in the future. Spectacular ash plumes and lava flows have formed but no people have been endangered. In July there were repeated ash emissions, but the residents were spared another eruption.

Despite Etna’s frightening activity, tours to the craters are available. Sports aces can make their way up the steep path. For everyone else, jeeps and a cable car are also available. Pay particular attention to where you cross-country ski, because lots of ladybugs, which are even supposed to bring luck, adorn the paths. Or you can make a stopover in Catania, one of the top cities in Italy.

Stromboli is an Italian island in the Tyrrhenian Sea off the west coast of Calabria, is one of the most beautiful unknown Italian islands and is also the name of the volcano located there. Like Etna, Stromboli is still active and erupts again and again. It was not until July 3rd, 2019 that there were two violent explosions with clouds of smoke that reached up to 2 meters into the sky.

The holiday season outbreak caught many people on the island by surprise. After the eruption, numerous fires broke out in Ginostra, which were only extinguished a day later. Unfortunately, an Italian died who was about to hike to the crater.

Even if volcanoes can sometimes seem so calm, you shouldn’t risk it and rather avoid a climb. Volcanoes can be fascinating even from afar.

Of course, the Campi Flegrei should not be missing from my article about volcanoes in Italy. In German, the volcano is referred to as the Phlegraean Fields, located in Campania with its highest volcanic risk in the world. With a total of 40 individual volcanoes, they bring the world into turmoil.

The Phlegraean Fields are classified as a supervolcano, suggesting that when they erupt, they leave huge cauldrons in the ground. According to new research, the supervolcano will be more active and erupt more often than previously thought.

Unfortunately, Naples is also dangerously close to the Campi Flegrei. In the event of a possible outbreak, the Italian city could be severely affected.

The name of the next volcano in Italy already suggests that it is a volcano. The Vulcano is located on the island of the same name Vulcano in the archipelago of the Aeolian Islands. The island consists mainly of the volcano that rises 391 meters from the sea.

Sea crevices are still bubbling, and gases and sulfur are emerging through the crater cracks to the surface. The volcano is still active today and is monitored to quickly predict a possible eruption. In 1888, the last major explosion took place, throwing glowing lava through the air, setting the sulfur on fire and causing people to flee.

As with Stromboli, you should also consider carefully whether you really want to visit the island of Vulcano if it poses a high risk of erupting.

Your visit to Italy’s volcanoes

Well, I think you now know that Italy doesn’t always have to be a bed of roses. Volcanoes are sometimes unpredictable and extremely dangerous if you cannot predict their next eruption. Apart from that, Italy is of course still worth a visit.

Just look at the volcanoes from a safe distance and don’t hike to the crater if you don’t want to put yourself in danger.