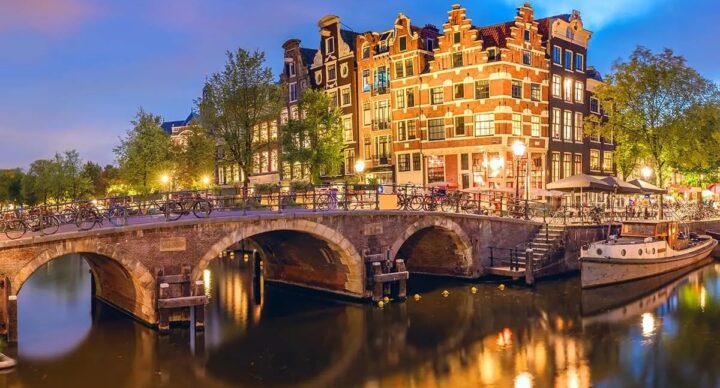 The best travel time for Amsterdam is basically from April to October. However, there are a few things to consider before booking your trip to the Dutch capital. You can find out how the climate in Amsterdam behaves and what the seasons look like if you read on. / Best Time to Visit Amsterdam

The climate in Amsterdam is classified by weather experts as oceanic. For the Dutch capital, this means a lot of rain and comparatively high humidity. The warmest months are June to August, which is typically summer.

However, it doesn’t get really warm with a maximum of 22°C. The probability of rain is relatively constant throughout the year, so an umbrella and rainproof clothing should be your constant companions. Incidentally, Amsterdam owes its maritime climate to its proximity to the water, more precisely to the North Sea.

To give you a better idea of ​​what the weather and climate looks like throughout the year, let’s take a closer look at each of the seasons in Amsterdam. Then you will find out why, despite the good temperatures, summer is not the best time to travel to Amsterdam.

Because of Amsterdam’s maritime influences, the winter months are quite pleasant. Only very rarely do you see the mercury drop below freezing. So snow is pretty rare in Amsterdam. In general, winter in Amsterdam is quite changeable and unpredictable.

Nevertheless, a trip to Amsterdam is possible during these months. Despite the cold temperatures, there is still a lot to experience. When the canals are frozen, you can, for example, lace up your skates and do a few lanes. Or you can stroll through the city during the Light Festival and marvel at the surreal world of lights.

And I have another tip for you: New Year’s Eve in Amsterdam is incomparable. The mood, the backdrop, everything is just right in the Dutch party metropolis. For a change, let it rip at the turn of the year in the Dutch capital.

Springtime is by far one of the best months to travel to Holland. The sun is slowly appearing longer and the temperatures are rising to spring-like values. However, the rainy days remain constant at around 10 days per month. So spring in Amsterdam lures with the best travel weather.

The absolute highlight that you should not miss is the tulip blossom in Holland. From mid-March to the end of May you can experience the stunning flower fields up close. Get on your bike and explore the colorful tulip fields around Amsterdam. No wonder spring is considered the best time to visit Amsterdam

For most travel destinations in Europe, summer is the best time to travel. Things are different in Amsterdam. Although the temperatures in the Dutch summer reach their maximum values, they are not particularly pleasant due to the high humidity. In addition, summer is the main travel season for Holland and Amsterdam.

Weather-wise, autumn in Amsterdam is similar to the spring months, but a little more changeable and unpredictable. That said, the streets of Amsterdam are a lot less busy in the off-season and you’ll have most of the sights to yourself.

You can also catch a few remaining rays of sunshine in September and October. However, as always, you have to reckon with some unexpected precipitation. Therefore, you should definitely study the weather forecast before your trip to Amsterdam and pack accordingly.

So the best time to travel to Amsterdam includes the spring and autumn months. With this knowledge, you can now start planning your vacation. Haven’t found the right deal yet? Then try your luck in my travel search engine. There you will find the latest Amsterdam holiday bargains according to your taste and budget.

Unfortunately, there is no guarantee of good weather in Amsterdam. Typical Amsterdam weather varies from just above freezing in winter to 28 degrees Celsius on summer days. You’ll often see Amsterdammers carrying an umbrella even on a hot July day, because there’s only one rule for Amsterdam: be prepared for the rain.

In winter, the city is often hit by cold and very strong winds that sweep around the corners of houses. Although you can visit Amsterdam at any time of the year, the spring and autumn months are the most pleasant.