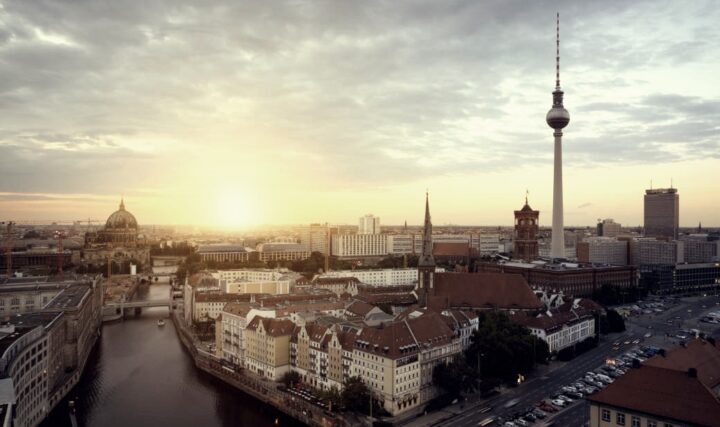 The 14 best vantage points in Berlin

On a city trip, it always helps to get an overview. And where better than from towers, churches or hills? / The 14 best vantage points in Berlin

The elevator shoots up in a matter of seconds. It stops more than 200 meters above the ground, the visitors get out and the German capital lies at their feet: The Berlin TV tower is not only a landmark, but also the tallest building in Germany at a total of 368 meters – and only one of 14 grandiose vantage points in Berlin. / The 14 best vantage points in Berlin

The television tower opened on October 3, 1969, and its striking shape can be seen far beyond the borders of Berlin. At a height of 203 meters is the panorama floor, directly above (207 meters) the Telecafé. The highlight: With a tasty meal in the morning or after sunset, you can see the entire panorama of Berlin in 30 or 60 minutes – because that’s how long it takes the entire floor to rotate 360 ​​degrees, depending on the setting of the restaurant.

The fastest elevator in Europe takes visitors to the 100 meter high vantage point in just 20 seconds – the platform of the Kollhoff Tower on Potsdamer Platz in Berlin. Practically all of the capital’s architectural highlights can be seen from the sun deck – whether it’s the television tower, victory column, Bellevue Palace, Berlin Cathedral or the Sony Center. In the panoramic café, which is glazed all around, visitors can also enjoy the view over a coffee and a piece of cake.

Berliners christened it the “Langer Lulatsch”, the 147 meter high steel radio tower built in 1926 in western Berlin. Originally it was supposed to function as a platform for antennas, but the viewing platform and an exclusive restaurant made it a capital attraction. Visitors can take the elevator to the platform at a height of 126 meters in just 33 seconds. But you can enjoy the wide view over Berlin for as long as you like.

If you want to enjoy the airy view directly from Alexanderplatz and still have a view of the television tower, you can visit the roof terrace of the “Park Inn”: at a height of 150 meters, everyone can relax in deckchairs and with a drink from the kiosk. If you are looking for a special kick, you can throw yourself into the depths with the world’s fastest personal cable winch. In this way you are definitely faster back down than with the elevator.

In the middle of the Großer Tiergarten stands the 67 meter high victory column with the shimmering goddess of victory Victoria, who Berliners simply call “Goldelse”. Gilded cannons from the Prussian wars adorn the reddish hull. But only those who are in good physical condition can enjoy the view of the Brandenburg Gate, Potsdamer Platz and the government district. There are a total of 285 steps and 51 meters in altitude to Berlin’s golden vantage point.

A very special vantage point is the “Welt” balloon right at Checkpoint Charlie in Berlin-Mitte: The Hi-Flyer is one of the largest helium balloons in the world and takes off every 15 minutes – provided the wind is weak – to a height of 150 meters , but remains connected to the ground. From above you can see numerous historical points of Berlin, the Axel Springer skyscraper and the Sony Center. The big advantage: There are no disturbing walls or houses around the balloon and the view is clear all around.

7. Bell Tower at the Olympic Stadium

When the weather is good, you can see Spandau on one side and Alexanderplatz on the other from the bell tower. When the air is particularly clear, it even reaches as far as Potsdam. The Waldbühne and the Olympic Stadium are located directly below the tower, which was renovated in 2006. A glass elevator takes visitors to the 77 meter high viewing platform. By the way, the current tower is not the first. The version built for the 1936 Olympic Games was destroyed by fire at the end of World War II, later blown up and rebuilt between 1960 and 1962.

The largest church in Berlin not only offers a fascinating sight inside. The dome tour at a height of around 50 meters also offers great views in all directions, especially due to the location in the center of the city: in the immediate vicinity of the vantage point are Alexanderplatz with the TV tower, the Red Town Hall, the Spree and the Museum Island as well as the Lustgarten Berlins.

Within the next few years we will find out what really happened in the old wiretapping and jamming system on Teufelsberg, because the corresponding archives in the USA are to be accessible from this year. Due to its location in West Berlin, surrounded by East German territory, it was the most important station of its kind. Since 2011, visitors have had the opportunity to at least explore the site on guided tours. In addition to the fantastic view (55 meters above city level), you can also admire one of the largest street art galleries in Germany in the old premises. In addition to the “silent tours”, historical tours are also offered.

As a place of history and the German parliament, the Reichstag building attracts almost three million visitors every year, making it the most visited parliament building in the world. From the roof you have a spectacular view over the Tiergarten and Potsdamer Platz as well as over the Spree and the Brandenburg Gate. Visitors have to register online beforehand and can climb up into the dome in addition to the roof terrace or even attend a plenary session.

The cathedral, built between 1780 and 1785, looks beautiful even from below. But the view from a height of around 40 meters is just as worthwhile. Because directly opposite, on the other side of the Gendarmenmarkt, is the identical German Cathedral, directly in between the Schauspielhaus Berlin. On the other side you have a good view of the Berlin Cathedral and the TV tower. But despite all the foresight, you should also look down – because from above you can see down to the floor of the cathedral.

The Kreuzberg has been used as a wine-growing region since the 15th century. Today, the Viktoriapark in particular invites you to stroll and linger at this point with lots of greenery and a waterfall. Since 1821 there has been a national monument at the top, commemorating the wars of liberation against Napoleon. And the view from 32 meters above the city level is also impressive: Alexanderplatz and Potsdamer Platz are not far away and stand out above the surrounding districts. Our tip for nature lovers.

In 1873, the construction of the Zionskirche, financially supported by Wilhelm I, was completed and influenced the emergence of a new, densely populated working-class district. The 67 meter high tower in Mitte, situated on an elevation, offers a great view over the rooftops of the area, including nearby Alexanderplatz, Berlin Cathedral and Prenzlauer Berg. There is no elevator – but visitors only climb 104 steps to the viewing platform.

The Volkspark is the oldest park in Berlin and was laid out in 1846 on the occasion of the 100th anniversary of Frederick the Great’s accession to the throne. In addition to the fairy tale fountain at the western end, the rubble mountain is worth a visit. It was heaped up after the Second World War to make the remains of Friedrichshain’s anti-aircraft systems disappear after the explosion failed. Hiking trails lead through dense forest to the top 40 meters above the city, which offers a seasonally varying view due to the forest.